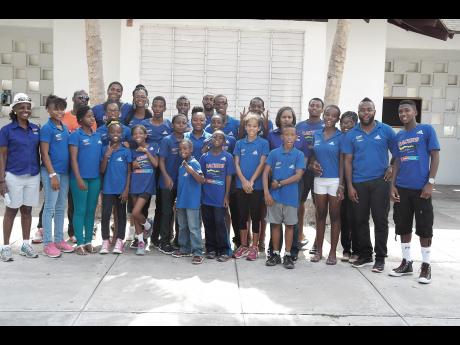 The ceremony was hosted by Sheldon Smith from Jamaica and Jaden Francis from the Cayman Islands. Presentations by Samuel Smith and Dana McDonald from Jamaica and Brittney-Anne Wiggan from England agreed with the other campers, that they all wanted to improve on their athletic ability when they decided to attend the camp.

Two of the campers had signed up for only two weeks initially, but changed their minds within the first few days to stay for the entire duration. They echoed their fellow campers as they detailed the hard work of the intense training sessions, nutritious food, skills of the coaches, the friendly atmosphere; the significant improvements in their running techniques and the friends they made. The Friday trips to the river and Wataland were particularly welcomed by the foreigners.

Other talents of the campers were discovered as they had two beautiful singing items and a dance item about the drills they learnt, choreographed by Remuell Medina from Trinidad.

Awards were made to the boy and girl who were judged the Most Congenial, Most Improved, Most Helpful, Most Hardworking and had the Best Kept Journal. Special prizes were awarded for the camper with the Best Team Spirit and the Most Courageous Camper. The prizes for the Beat Overall Performance went to Jaden Francis and Remuell Medina.

Guest speaker Allison Dexter, senior product manager from Cari-Med, gave a pep talk and supplies of Ensure and Pediasure for the little ones. Parents expressed satisfaction with the programme, thanked the coaches and promised to send their children next year.

The summer camp is hosted by Racers Track Club on the campus of the University of the West Indies, Mona campus, from July 6 to 24. Participants came from, the United States, Canada, England, British Virgin Islands, The Cayman Islands, and Trinidad. The main sponsor, Jamaica Broilers, has been with the camp since 2013.