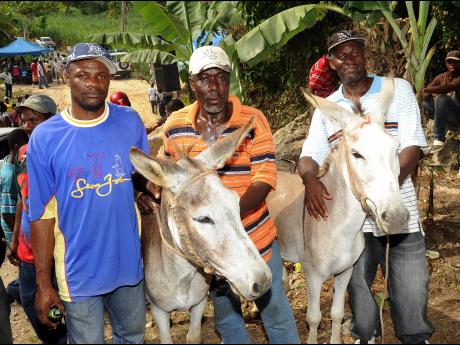 The most prominent form of racing in Jamaica is track and field but, over the years, in the rural community of Top Hill, St Catherine, donkey racing has taken over as one of the most anticipated events.

The idea of donkeys racing is comical, which is why its rise to popularity has been so fast in the community.

The annual race is now gaining attention outside of the community, as more and more visitors come yearly.

The race needs more sponsorship than ever before if the 21-year tradition is to be kept going.

Percival Bair, promoter of the Donkey Races, said this year’s event was expected to be a big one, pulling in a large crowd.

However he said that he has received no large sponsorship for the races so far.

“I have looked at sponsorships… But nothing has come my way… It can happen though,” Bair said, sounding optimistic.

Bair’s optimism was proven justified when we contacted Robert Pickersgill, member of parliament for Northwest St Catherine on the matter.

“Well, yes, large sponsorship won't be a problem… We have just finished speaking to Rum Fire and they are on board… As a matter of fact, they are supposed to be meeting with Percival today,” Pickersgill said.

Pickersgill said the constituency has sponsored the event by gathering funds for the winner of the contest as well as funds for the best-dressed donkey, along with funds for other competitions on that day.

Hugh Graham, councillor for the Lluidas Vale division,  also told The Gleaner that he was also aware of the need for large sponsorship and that he along with  Pickersgill have combined forces to sponsor this year’s event.

When asked about what Rum Fire would bring to the table, Graham said the Donkey Races in Top Hill, St Catherine were a longstanding tradition and since its rise to popularity residents of the area have also benefited economically.

Graham said Rum Fire would sponsor alcohol to the eight bars located in the area.

Pressed on the matter of making the event an official day on the national entertainment calendar as he suggested last year, Pickersgill said he has propositioned the Jamaica Cultural Development Commission (JCDC) but is yet to get a response.