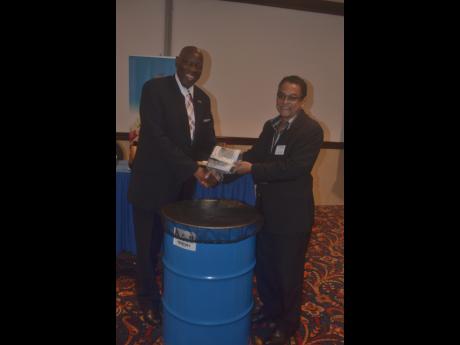 On Tuesday, the Ministry of Health introduced the 45- to 55-gallon mosquito mesh drum covers as part of its vector-control measures to ensure the health of the country.

Speaking at the launch at The Jamaica Pegasus hotel in New Kingston, Minister of Health Dr Fenton Ferguson said that a number of factors have led to the increase in vulnerability of countries in the Caribbean, including Jamaica for disease outbreaks, "among them, some never before experienced in this region, such as the Zika virus, which remains a threat to the region."

He said it was imperative that Jamaica take steps to prevent an outbreak by taking steps to control the mosquito population.

The new mesh drums covers were part of a collaborative effort with the Ministry of Local Government and Community Development to strengthen the vector-control programme.

Ferguson stated that in most situations where the containers cannot be removed, "covering the container will be the next best thing". Thus, the idea of the mesh drum covers, which would keep the mosquitoes out, rendering them unable to lay eggs in the stored water.

The Health Minister is hopeful that the innovation will go a far way in controlling mosquito breeding. He also noted that the ministry was "working constantly to implement new ideas and new approaches in order to tackle the vector control".

Local Government Minister Noel Arscott said that the only way to prevent the rapid growth of the vector is for them to "control the breeding sites, then we can win the war".