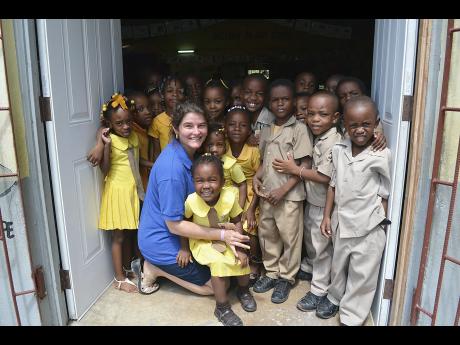 A happy Samantha Mahfood, executive director of Food For The Poor Canada, is surrounded by students of Triumphant Basic School in their new building. The school is located in Montpelier, St James.

Thanks to efforts from the staff of Maple Leafs Sports and Entertainment Limited and friends and family of Helping Hands Jamaica Foundation, children from Montego Bay, St James, have a brand new basic school.

Work began on the Triumphant Basic School in the Second City on June 29 with a staff complement of 70 volunteers from Canada. The school is expected to accommodate 150 students.

The project was facilitated by Food For The Poor Canada.

"It is such a joy to share in the rewarding work of building a school with two great partner organisations and their volunteers," commented Samantha Mahfood, executive director of Food For The Poor Canada, about the project.

According to her, the children benefiting from the basic school will be thrilled just as much as the Canadian volunteers who made it happen.

Only one in region

The Triumphant Basic School will be serving the Montpelier community and it is the only basic school in the region.

"The school has been in operation since 1989 and over the years has used a shared space - school classrooms are regularly packed up to allow community use. The school has grown to almost 150 students in a very cramped space that is divided by blackboards and temporary walls. The building has incurred damage to the roof and there is rain damage to the educational supplies and classrooms," Petri-Ann Henry, public relations officer of Food For the Poor Jamaica, told Rural Xpress.

The new school will provide eight separate classrooms, a kitchen with industrial-sized stove and a fridge, a principal's office, an outdoor eating area, a playground with swings, slide and climbing frame.

According to Henry, the school was chosen because of its importance in the area as the main early childhood school serving the community, with a high need for a beautiful, safe space that will allow children to succeed and thrive.

Over the last three years, Food For The Poor has built 50 schools in Jamaica, 10 of which were built by the organisation's Canadian partners. The schools have provided more than 5,000 children across the country with access to safe and happy learning.