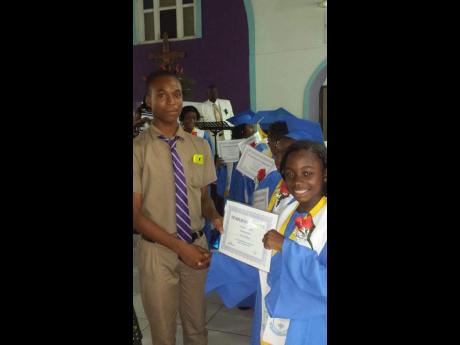 While most seven-year-olds were focused on making new friends in primary school, Tai-wan Gayle had to be coping with the death of his father, Marlon Gayle, who died as a result of complications due to diabetes in 2007.

Now 15, Tai-wan has decided to honour his father's memory by reaching out to his community. With the support of his mother, Lisa Morgan, and several key figures in St Thomas, Tai-wan has been instrumental in recognising students for their hard work in a number of schools. The Kingston College student sponsored the Font Hill Primary School sports day, providing medals and awards to the students who did well. Most recently, however, 13 graduates from St Thomas Hill View Preparatory School were the recipients of awards provided by Tai-wan, through sponsorship from St Thomas Police commander Superintendent Charmaine Shand and Gnet Internet Store.

All the successful St Thomas Hill View Preparatory School Grade Six Achievement Test (GSAT) students received the Marlon Gayle Award certificates for excellence, while three top GSAT performers received trophies, also in Gayle's name. While not yet a full scholarship, Tai-wan hopes that the students will be inspired to continue to do well.

"I just want the kids to do their best and work hard," he told Rural Xpress.

Morgan believes that the spirit of philanthropy and independence in her son came from his father. She describes Gayle as a really good father, who had a great connection with his son, and corresponded frequently with Tai-wan even while he was overseas. His death shocked Morgan, but she is certain it has impacted her son more.

"It was sad. But I felt it really more for my son because he didn't know him. I don't think he's over it. That is why he is doing this. But I am not worried about him. Not at all," she told Rural Xpress.

Tai-wan, she revealed, is fiercely independent, and works mostly on his own initiative. She describes him as a doer, a family person, and a focused young man destined for great things.

"I tell him whatever he starts, he should finish. And he does. When he started this scholarship, he is the one who got the support and the sponsorship. I didn't even know about some aspects of it until everything was complete. He is a great child, and a lot of people in Morant Bay tell me so," Morgan shared.

Tai-wan is also active in St Thomas in another number of ways, playing for the St Thomas Under-15 football team, as well as the Seaforth Under-17. He is also active for his school in swimming and occasionally track and field. He is hopeful that he can one day establish a scholarship that will enable deserving students from St Thomas to continue their education in honour of his father, whose life and death, Morgan says, has had an immense impact on her son's sense of duty and civic responsibility.