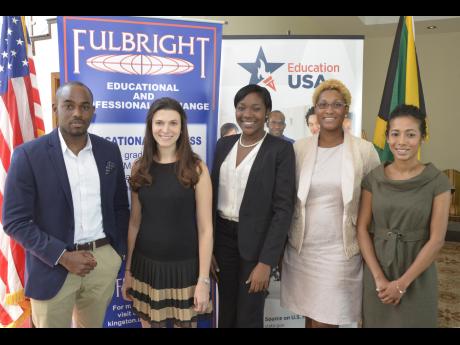 After undergoing a tough interview process in addition to not having enough resources, Patrice Anderson, was pleasantly surprised when she got the call that she was one of the persons chosen for the United States (US) 2015-2016 Fulbright Graduate Student Program.

The 25-year-old will be pursuing a doctor of philosophy degree in applied economics at the Western Michigan University.

Following a luncheon held at the residence of the US ambassador in Jacks Hill, St Andrew, she told The Gleaner that the process was tedious but indicated that she was determined to do her best.

"I remember when I was doing the interview, I had questions coming at me and some were really difficult and it is very competitive. so I left thinking that I didn't do very well", she said.

"When I got the call that I was accepted, it was a very good feeling and I am feeling very elated," she continued.

Anderson, however, pointed out that her will to persevere started since she was pursuing her undergraduate studies at the University of the West Indies.

"The challenge started since I started high school. I grew up in Trelawny where the normal thing to do after high school is to get a job, but I decided that, despite the circumstances I was going to pursue tertiary education. I came to university with only $40,000 for the year so, since that time, I knew the value of hard work and not having enough resources", Anderson said.

"I did not have any other option but to perform the best. I knew I had to ensure that my grades were the best at all times so as to ensure that, when opportunities like these emerge, I am qualified. A scholarship was the only way I could pursue my master's (degree) and a PhD.

She, therefore, encouraged young people to "Always work hard. You will not always have resources at your disposal, but anything is possible. Keep focused, you never know when something will pop up."

Twenty-seven-year-old Kersen Stephens, who will be pursuing a master's degree in financial mathematics at the North Carolina State University, echoed similar sentiments, noting that "I have been interested in the scholarship for four years now. I eventually applied in 2013, but I didn't get through, so that was rough for me. but I applied and I was finally accepted and, trust me, it is an amazing feeling."

He added: "It is somewhat of a dream because I always wanted the opportunity to go abroad and study. For me it is a very big deal. I want to say to young people not to give up because failure doesn't necessarily mean failing a test, but when you give up you, have failed big time."

The 10-month 2015 Hubert H. Humphrey Fellowship Program is intended to bring accomplished mid-level professionals to the US for a year of combined academic (non-degree) and professional work, resulting in a certificate from the US government.