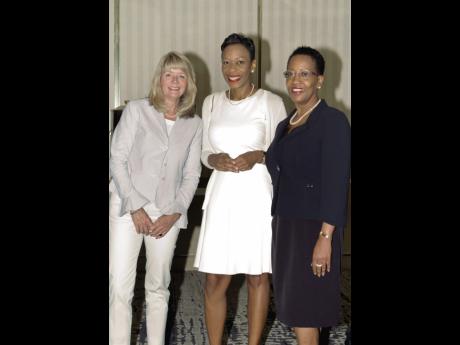 Contributed
From left: Diane McAuliffe, vice-president for C&W Business; Rochelle Cameron, CANTO director and vice-president for legal and regulatory affairs at Cable & Wireless Jamaica & Cayman, and Opal Neil, regional director for Cable and Wireless Communications, were out supporting the call for more women to get involved in ICT. 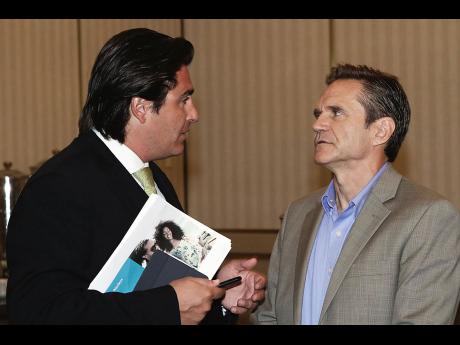 Contributed
Carlo Alloni (left), group chief technology and information officer, and the executive vice-president in charge of C&W’s network, Paul Scott, in discussion at the conference.
1
2

The 31st staging of the Caribbean Association of National Telecommunications Organisations, CANTO 2015, saw representatives from North America and the Caribbean region discussing matters related to the ICT industry and ways that can improve it. It was held from July 26 to 31 in Miami, Florida, under the theme 'Improving lives through broadband innovation'.

The exhibition saw a 40 per cent increase over last year, had more than 500 persons in attendance and engaged in the proceedings that involved riveting presentations and productive debates.

Key among the discussions was the general state of broadband connectivity in the region. Other key topics that were discussed included moves to eliminate the vexed issue of roaming rates in the Caribbean; youth unemployment which has been running at record high levels in the last decade; the creation of a Caribbean Community (CARICOM) Single ICT Space; the state of broadband connectivity in the region; correlation between increased levels of broadband penetration and GDP growth, as well as the issue of Over The Top Providers (OTTP).

According to CANTO director and LIME's VP of legal and regulatory affairs, Rochelle Cameron, "OTTPs are here to stay. Cable & Wireless currently does not block OTTPs, but there needs to be regulations in place for them and they need to pay the requisite licences. The networks now pay the costs for OTTPs, so the necessary regulatory regime needs to be put in place and the Caribbean governments need to lead the way," Cameron said.

Cameron also stated that the way had been cleared for Caribbean governments to play a more active role in pushing ICTs for development of their territories.

Also emerging from the deliberations was a more equitable representation for women on the board of CANTO, which participants hailed as a breakthrough for women in an area that has been dominated by men.

According to Cameron, "There was also a very good session on Caribbean women in ICT - how do we improve the lives of women through ICT; how do we get our girls involved? However, "The CANTO board is a reflection of the growth that women have made in recent times," she stated.

The CANTO 2015 exhibition showcased more than 80 booths within the conference hall and assisted participants in providing a better understanding of the ICT sector in the Caribbean.