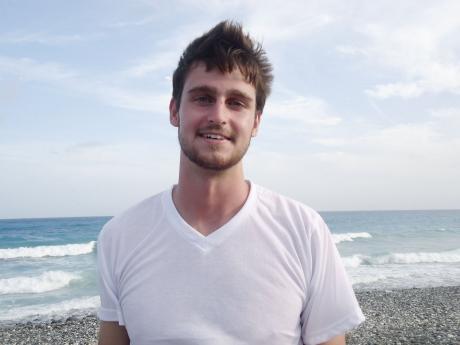 Ian Hash, from Washington D.C. in the United States, came to Jamaica in March as a volunteer with the US Peace Corps.

After six weeks of training in Port Morant, St Thomas, and living and working with farmers in Red Lands, Clarendon, the 24-year-old has come to think of the island as his home. Through his work with the Peace Corps, Hash assists farmers in Clarendon to improve agricultural practices, including water conservation and crop planning, and to develop resilience to climate change. He also volunteers with schools, spending one or two days a week with community children, developing 4-H projects such as recycling, tree planting, and school gardens.

Hash told Family and Religion that his integration into the Clarendon community was due largely to the warmth and welcoming spirit of the residents, and it was aided, in no small part, by his mastery of Jamaican Creole, which Hash speaks fluently.

"I am constantly learning new Patois everyday and the different versions for each parish, but I had it pretty good after about 10 weeks of training," he said.

Outside of his work with the Peace Corps, Hash has been very active. He recently volunteered with the Jamaica Surfing Association at this year's staging of the Makka Pro Surfing Competition in St Thomas, assisting with the computerised scoring and setting up of equipment. An avid surfer himself, Hash lamented the fact that he lives in land-locked Clarendon.

"I literally live two miles away from the centre of Jamaica. There's a marker that you can go to and see that says so. That's the only unfortunate thing that has happened to me since I came here, that they put me in the middle of Jamaica," he told Family and Religion.

Like most visitors to the island, Hash said he knew about Jamaica, having been exposed to Jamaican music and sports personalities, though it was not his choice to visit.

"The Peace Corps allows you to experience a new culture, to come and help the people. You don't get to choose where you go. I joined as part of my coursework for my Master of Forest Resources at the University of Washington in Seattle. But I'm glad I came here,"' he said.

Hash has a special appreciation for Jamaican cuisine, listing jerked chicken and pork, curry, mangoes, ackee and saltfish, and bulla and pear as his standout dishes. Though his voluntary service with the Peace Corps will only last two years, Hash has not ruled out the possibility of making the island his permanent home.

"Some people come here and never leave. I may go back, but maybe only for visits. I love it here. It's hot, but apart from the heat, I love it," he said.