Brave and in boots - JCF the next frontier for women 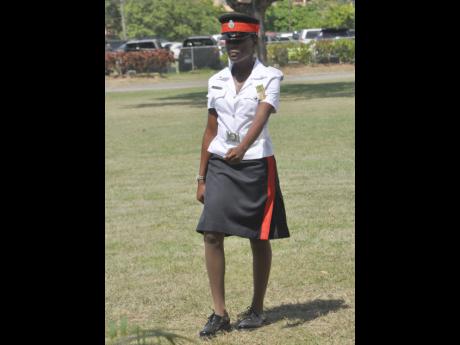 Jermaine Barnaby
Woman constable Sherene Bailey getting ready to receive the Medal of Honour for Gallantry in 2014.

Despite the daily danger on the job and the recent killing of one of their gender, women are not shying away from the dangerous task of policing the nation's violent streets.

In fact, hundreds of women are beating down the doors of the Jamaica Constabulary Force (JCF) offering to serve, protect and reassure Jamaicans.

Police Commissioner Carl Williams has accepted that with more women than men entering and graduating from institutions of higher learning, several females are seeking to join the Force.

"We are seeing an increasing number of women being recruited to the force. Right now we have a queue of some 5,000 to 10,000 persons just waiting to become members, a majority of whom are women," Williams told a Gleaner Special Editors' Forum last Thursday.

Rejecting the notion that women are not suited for the killing streets of Jamaica, Williams pointed to constable Crystal Thomas, who was gunned down on a bus in the Corporate Area last month, as a woman "as brave as any male colleague".

"There are a number of women out there who are just as brave as men. They go to work and you would not know the difference if you were to just look at what they do," said Williams.

While supporting Williams, Deputy Police Commissioner Glenmore Hinds argued that the recruitment of women for armed duties must be a

managed process as the death of a female colleague demoralises the entire Force.

"There is a general view though that armed forces all over the world generally do not recruit a substantial number of women because injury or death of a woman has a demoralising effect on the troops, and so it has to be a managed process," explained Hines.

This was underlined by the police commissioner, who said irrespective of their bravery and dedication, there are some aspects of policing better suited for men.

"There are some duties that women are not going to be well suited for - duties that take them from their homes for a number of days at times, in hills and bushes. Police men are better suited there," argued Williams.

While a number of women have risen to officer rank in the JCF, including superintendents and senior superintendents, they have been less visible at the very top of the Force.

Deputy Commissioner Jevene Bent broke the mould before she retired, while Novelette Grant now serves as a deputy commissioner.