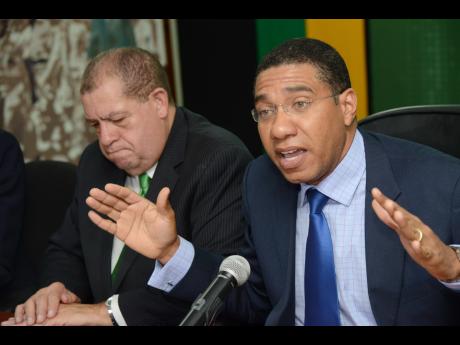 Opposition Leader Andrew Holness is claiming that the Government in paying off the PetroCaribe debt is putting itself under a cash-flow threat.

“What is of great concern to us is that in trying to manage down the cost of debt, and the stock of debt, that the government would seek to liquidate a debt that is not troubling anybody.  The PetroCaribe debt is one of the mildest debt arrangements that any country could get,” Holness said.

The Opposition Leader was speaking at a press conference at the Jamaica Labour Party’s (JLP) Belmont Road headquarters on Tuesday morning.

On July 23, Jamaica raised US$2 billion on the international capital market – the highest amount it has ever raised during a single transaction window - at the lowest rates it has ever been able to access from that market.

A third of that money, US$650 million, has a maturity term of 30 years while the remaining $1.35 billion has final maturity of 13 years in 2028.
Jamaica raised the bonds to pay off about US$3 billion in oil debt to Venezuela.

The debt has been discounted by about 50 per cent as part of the buy-back.

Aubyn Hill, the chairman of the JLP’s economic advisory council, said, in his 40-year career as a banker, his approach has been to advise clients to leave cheap debts like PetroCaribe until last.

“When I see my clients have debt to be repaid, I always advise them to pay down the expensive debt before you pay down the cheap debt. You keep the cheap debt as long as you can. In this case, PetroCaribe was 25 years. Mi nuh understand why Dr Phillips walk out and pay down 1 per cent debt with bonds, one of which is for 30 years at 7.875 per cent money,” Hill said.

Hill said that the arrangement could lead to Jamaica having serious cash-flow problems resulting in the need for more taxes.

“This one is going to cost us US$109 million a year versus US$30 million… Mi nuh understand how this works,” Hill said.

He argued that the transaction will mean that at the end of 30 years Jamaica would have paid US$2.7 billion in interest and still have US$1.5 billion principal to pay.

According to Hill, as a result, the finance minister will have no choice but to heap more taxes on Jamaicans to pay for the deal.

The Opposition Spokesman on Finance, Audley Shaw, concurred that classic prudential management of business and the country’s affairs, dictated that the cheapest debt is last debt to be "touched".

"What this government has done is that they have retired PetroCaribe debt at 1 per cent interest rate per year and have replaced it with an average debt servicing cost of 7.1 per cent on the US$1.5 billion that they have raised on the international capital market."