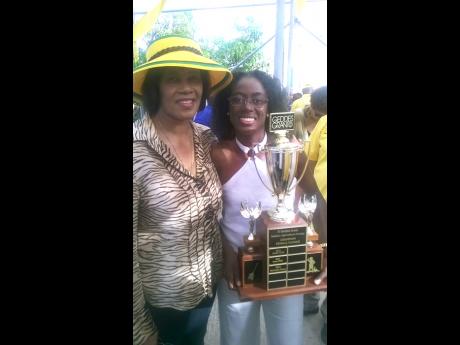 By day, newly crowned Champion Female Farmer Michelle Black runs a 39-acre farm in the parish of St Ann, and by night she can be found on the hotel circuit performing as a cabaret singer.

Rural Xpress caught up with her at the Denbigh showground in Clarendon at the 63rd staging of the annual Denbigh Agricultural, Industrial and Food Show, after she was crowned, giving her a chance to talk about her two passions.

Black said she has a full plate, but with reliable help she can do both.

"My cabaret singing takes me out six nights per week, I get home most evenings at 7 p.m. to 7:15 p.m. from the farm, and I have to be on location to get on stage at 9 p.m. I do weddings, special functions, etc. I also have my own band and equipment," she said.

With her making a success of both, you would think those were her first two loves - no, her dream was to be a veterinarian, but her parents were unable to send her to further her studies.

"As a child, my grandfather planted different crops, some of which he would take to the market, and of course, for our own household use, and that I admired because he was also a tailor by profession, but yet he saw the need to have a second income," she said about the way she developed her love of farming.

Singing started for her at a young age at the Ebenezer Methodist Church in Bamboo, St Ann. She continued until she took it to a professional level in 1997.

Today, Black employs from eight to 15 (depending on what's happening), and farms produce such as sweet and yellow yams, ginger, pineapple, as well as rearing animals.

Being a woman in the business, she said, it is difficult to get it established. She sees her business as being in the infancy stage.

"As a female, I think that is a plus for me as I do get a little extra attention from the males who dominate farming community. Believe it or not, getting into establishments has been a major challenge," she said.

Black also has to deal with the lack of understanding of the farming business from establishments such as supermarkets.

"When I grow the regular items there is a glut and low prices; when I grow more rare items, especially tomatoes 'unusual types', it does not move, as I am told there is no code in the system for the items or the entity has never purchased it locally," she said.

However, it's not all gloom and doom as she said she has four entities that have been very good to her - Progressive Supermarket in Ocho Rios, General Foods Supermarket, Jamaica Inn Hotel and Golden Eye Hotel.

Like all farmers, Black, too, has to battle her way through the climate change and drought challenge, which she said has put a major dent on the operations two years in a row.

"Yield has dropped significantly in all areas to the extent that this is impacting even on planting materials for yams, ginger, and pineapple, as due to the amount planted three years ago, I was projecting to have a surplus that would become an additional income stream, but now I have to be buying from other farmers."

To combat this setback, Black said she bought a shredder for grass to mulch the crop, she erected a shade house and is looking to put up more, and is purchasing more goat feeds.

In spite of all the challenges, Black said she is driven by her passion and the wonder of watching how nature takes its course.