Dual elections not an obligation - ECJ 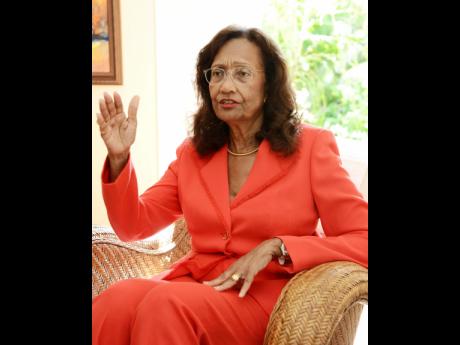 File
Dorothy Pine-McLarty, chairman of the Electoral Commission of Jamaica, is a staunch advocate for holding both local government and general elections on the same day, a move that would save millions of dollars.

Chairman of the Electoral Office of Jamaica (ECJ) Dorothy Pine-McLarty has said the recommendation for legislative changes to be made to facilitate the possibility of holding local government and parliamentary elections on the same day is not to make dual elections an obligation, but an option available to the Government.

She has also made it clear that the proposal is in no way intended to infringe on the prime minister's constitutional right to determine the date of elections in keeping with legislation.

"The Electoral Commission has no authority to dictate to the Government when elections are carried out. That remains the express prerogative of the prime minister. However, we strongly recommend that the necessary legislative changes be made to give the Government the choice to hold local and central government elections either separately or together. We are not suggesting that the Government be bound to one or the other, but that provisions are put in place for a dual election, should it become feasible at any time," she explained.

The chairman further indicated that the move would be a progressive one for the Jamaican electorate, putting the country on par with several jurisdictions across the world that already carry out this practice. In the case of the May 2014 dual elections in South Africa, Pine-McLarty observed a smooth process, citing no reason that the same could not be done in Jamaica. Although on a smaller scale, Jamaica already has experience in twinning elections in the three constituencies making up the municipality of Portmore, where electors vote for councillors and a directly elected mayor during local government polls.

"We would like to have the necessary changes in place, as well as the plans for a major public-education campaign. As a commission, we would be negligent if the plans are not made in light of the postponement of local government elections, now due by December 2016, and the distinct possibility that a joint election could be contemplated.

A feasibility paper outlining the requirements for holding a dual election has been prepared by Director of Elections Orrette Fisher, and is being reviewed by the ECJ.