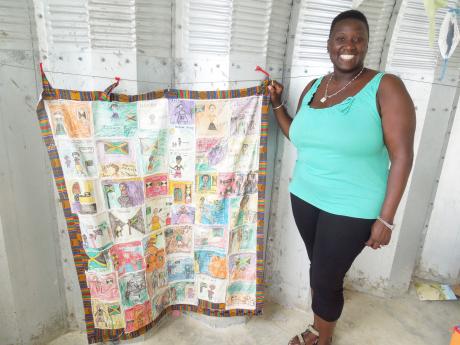 Keisha Shirley, director of Johnstown Nature School, shows one of the projects done at the summer school.

Putting a twist on the usual notion of summer school, Keisha Shirley, a returning resident of the Johnstown community in St Thomas, created the Nature School.

"My sister and I wanted to do something with our time. We volunteered at the school in the community for a couple of months and then we realised that they were in need of a summer school like the one we now operate," Shirley told Rural Xpress, adding that the summer schools that were there were strictly academic.

Now the director of the Johnstown Nature Summer School, Shirley spoke of a time when they were just starting out.

She said: "My sister used to walk around the community with an old school bell shouting 'Come to summer school. It's free!' That summer we got more than 100 students."

The Johnstown Nature Summer School began on the grounds of the community's primary school. Children of all ages attended classes where they learned the various aspects of arts and craft.

"The kids were very excited by the painting and the drawing, and then we decided to add a little literacy to the syllabus," Shirley said, pointing out that many of the children weren't as attentive and interested in the newly added course.

The nature school, which has been in operation for the past eight summers made its big move in the fifth summer, to its own building.

This gave the teachers their own space, thus allowing them to decide what they did with the surroundings.

According to Shirley: "Last summer, we chose to make a pond, because it's a nature school. The children were very excited about the project. Together we mapped and planned what we wanted the area to look like.

"We bought all the material needed to complete the project and we had fun doing it all. That summer our theme was 'Nature Cycle'. We talked about the different plants and animals in the aquatic environment," she said, adding that the drought made it hard for the flowers they planted to flourish.

The director of the nature school was pleased to tell Rural Xpress that every year they add something new to the curriculum.

"We sit and brainstorm what we want our theme to be. We make note of the things the children mention they would like and see how best we can accommodate their requests."

This summer saw children focusing on the portrait of a leader.