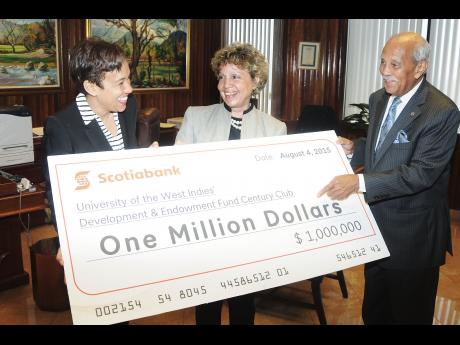 Contributed
Jacqueline Sharp (left), president and CEO of Scotia Group, hands over a $1-million cheque to Dennis Lalor, chairman of the University of the West Indies Development and Endowment Fund, as part of the banks contribution to their 25th anniversary celebrations. Sharing the moment is Carla Seaga, executive director of the fund.

Scotiabank has endorsed its commitment to the continued development of the University of the West Indies (UWI), Mona campus, by recommitting $1 million towards the UWI Development and Endowment Fund (UWIDEF). The presentation was made by Jacqueline Sharp, president and CEO, Scotia Group, to Dennis Lalor, chairman of the fund, and its executive director, Carla Seaga, at the Scotia Centre building, downtown Kingston, yesterday morning.

"We are always happy to support the university, as we too are committed to empowering youth development and the building of leaders in Jamaica," said Sharp.

Twenty-five years ago, Scotiabank was one of a number of corporate entities to respond to the plea for assistance after the campus was devastated by the passage of Hurricane Gilbert. Then, to effectively restore the campus, they needed $100 million. Seventy-eight companies responded to the call and subsequently, to honour them, the prestigious Century Club was created.

Since then, the fund has supported a number of projects that have impacted student life, increased access to education, and enriched the quality of the Mona campus' offerings to its students. These include funding of the Tropical Metabolic Research Institute for Discover Research for Obesity, refurbishing a number of lecture theatres, varied grants, and the establishment of more than 50 scholarships for students.

Now, in recognition of their 25th anniversary, the UWIDEF has reached out for an additional contribution of $1 million to be better able to assist the university in meeting the needs of the growing and changing campus community. Scotiabank has once again responded to the appeal.

"Scotiabank has been really great to us," said Lalor, as he expressed his appreciation for the support. "It is because of Scotiabank and other companies like it, why the university exists today," he continued.

Through numerous programmes and partnerships, Scotiabank has maintained its mandate to enhance youth through developmental opportunities in sports, education and health. This contribution aligns with the bank's focus on education and the development of future leaders.