Dreaming Big Pays Off for Ward of State 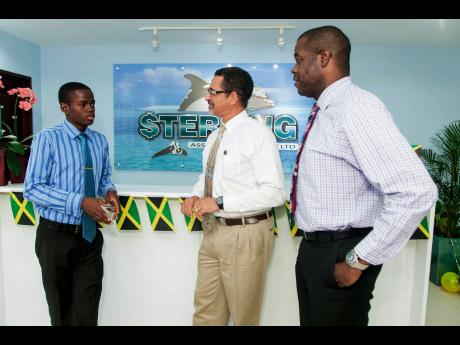 When Treniel Lowe turned 18, he was not sure what his next move would be.

Having been under the guardianship of the Maxfield Park Children's Home, a facility of the Child Development Agency (CDA), since age two, the realisation that he would soon no longer be a ward left a looming question mark. With seven CSEC grade ones and twos, Lowe enrolled at the College of Agriculture, Science and Education to pursue an associate of science degree.

His long-term goal was to pursue a bachelor of science degree in hospitality and tourism at the University of Technology, but without the backing of the CDA, this seemed impossible. However, in stepped Sterling Asset Management, and through their ongoing relationship with Maxfield Park, the company has offered him a full scholarship for the tenure of his degree.

This is the second scholarship, inclusive of tuition, fees, books, and accommodations, that Sterling has awarded to a ward of the Maxfield Park Children's Home.

"Sterling has supported the wards of Maxfield Park in pursuing their academic dreams at the university level," said Kevin Richards, vice-president of sales and marketing at Sterling. The first recipient was Damian Harris, who received assistance from Sterling to resit his CSEC English exam and then pursue his university degree. Harris has since joined the staff at Sterling as an operations officer. Both former wards are Rotarians who have been actively involved in the club and in their community - proof that being a charitable person pays off. Lowe attributes his active involvement in the community to his time at Maxfield Park.

"For me, it was like growing up in a regular home or even better in some instances, because as a ward of the state, I was afforded certain privileges and opportunities," he said. Lowe was the first child advocate on the Children's Advisory Panel, as well as a Swim Jamaica athlete, basketball player and award-winning debater.

Lowe describes himself as a person who is "assertive, with positive leadership and strong interpersonal skills, responsible and committed to defying all odds and reaching the highest goals possible". His scholarship from Sterling will help him to overcome a major financial hurdle and reach those lofty goals.

"Five years from now, I see myself as the food and beverage manager in one of the hotels along the north coast with intentions of being the general manager," Lowe said. Sterling is dedicated to assisting those who dare to dream big.

"We have always provided assistance in the area of education and Treniel has shown dedication over the years with his aim of matriculating to the university level and we are happy to support him," said Richards.