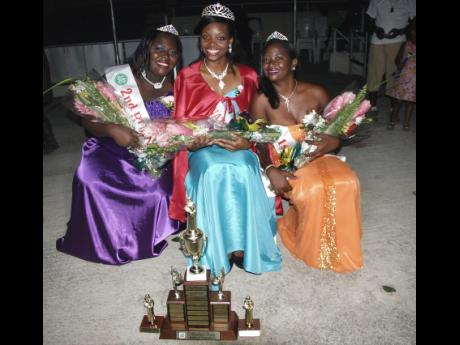 The 11 parish champions who participated in last Friday's National Farm Queen Competition on the opening night of the annual Denbigh Agricultural, Industrial and Food Show showed poise, determination and character, given the trying circumstances under which the coronation was done.

Starting more than one and a half hours after the 6 p.m. listed on the programme, the event officially ended long after 11 p.m., well beyond the 9 p.m. end indicated on the programme circulated by the organisers. This was despite the fact that Trelawny and Hanover did not participate this year, cutting the number of entrants to 11.

She also took the Best Technical Paper presentation category. This award is split in two sections - written and oral presentations.

Stewart, who hails from a farming community, engages in backyard farming, but nothing at the commercial level. The sales agent however "grew up in farming" and prepared for the competition by investing in a lot of research about the areas in which she was not quite so knowledgeable.

Ellonia Rochester Grant, the 1969 National Farm Queen who now lives in the United States and attended the show with her husband, was very happy to help with the presentations, also posing with the 2015 queen.

Meanwhile, with the show getting off to a very late start, Stewart's coronation was marred by the stage being plunged into darkness just as master of ceremonies Jean Paul Menou was about to make the announcement.

With no explanation of remedy coming from the show's organisers, the event was completed with lighting provided by video and still flash cameras.

After three of the sectional prizes had been awarded, the contestants were called back on stage to receive their cash awards from this year's title sponsor Nutramix.

Then when the gift packages from Evergrow Garden were handed out, two of the ladies were left in the dark, with no other explanation from the organisers that these would be supplied at a later date.

Throughout it all, however, the top-three farm queens kept their composure, smiling throughout and taking things in stride, patiently obliging the many requests to pose time and again.