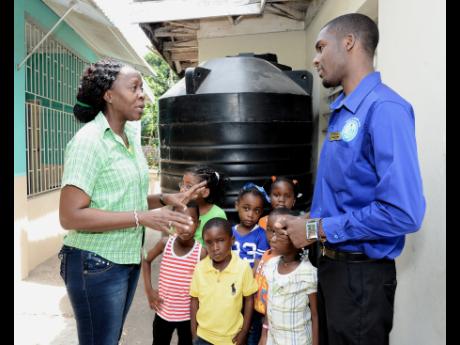 Ian Allen
Elaine Coward-Barnes (left), vice-principal at Clarion Basic School in Maverley, St Andrew, says thanks to Lindel Parke, president of the University of Technology's Human Resource, Administrative and Information Management System, shortly after he presented a 720 gallon water tank to the institution.

With severe drought affecting the country, and most schools scheduled to begin the new academic year in less than a month, the Ministry of Education is bracing for a possible disruption of classes.

"It is possible, (but) we hope not," Education Minister Ronald Thwaites told The Sunday Gleaner.

"But we have a contingency plan. A meeting took place earlier this week (last week) to look at schools that don't have a tank at all, to see how provisions can be made. We have received considerable assistance from CHASE Fund (The Culture, Health, Arts, Sports and Education), JSIF (The Jamaica Social Investment Fund), Food for the Poor and some of the foundations, Digicel primary among them," added Thwaites.

According to Thwaites, a list will be provided to the Ministry of Water, Land, Environment and Climate Change for those schools which will need assistance.

However, all preparations will not be put in place until closer to the start of the school year.

"We have to be very careful, because last year when we did this, even as the situation was less acute, by the time schools opened, the tanks were empty," said Thwaites.

"So what we are doing is waiting until closer to school time, then we will be making final preparations when classes start. It is going to be a difficult situation."

The drought is also posing a danger to infrastructure, with principal of the Hampton School located in St Elizabeth, Heather Murray, revealing that bush fires threatened the building last Tuesday.

"I had to have extra persons out yesterday, because of the bush fires, to man the fence lines and prevent the 150-year-old building from being burnt flat," said Murray.