Human-trafficking tragedy - US needs to give Jamaica its due 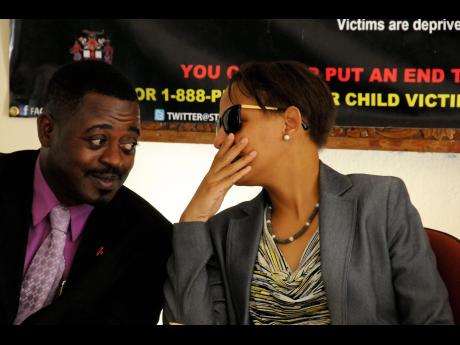 This past week, we were greeted with the news that Minister of Justice Mark Golding was disheartened with aspects of the 2015 Trafficking in Persons Report of the

Golding was particularly peeved with the continuation of the Tier 2 Watch List ranking which Jamaica received last year for its attempts to deal with trafficking in persons.

The US report stated that, "Jamaica does not comply with the minimum standards for the elimination of trafficking; however, it is making significant efforts to do so." The report also stated that Jamaica's rating remained unchanged over last year's because, "the Government did not demonstrate evidence of overall increasing anti-trafficking efforts compared to the previous period".

However, this could impact Jamaica's ability to access funding as the countries deemed not fully compliant with efforts to prevent trafficking can be banned from some financial programmes.

From where I sit, there seems to have been a tremendous flurry of sensitisation programmes and public-awareness campaigns around trafficking in persons over the past year; more training of judges, prosecutors at all levels of the system, the police, and more campaigns on local television and radio.

The attempts have been constant and in your face and, therefore, I do feel some sympathy for the justice minister, the chief justice and the director of public prosecutions (DPP) who have been key figures in ramping up the ante in this area.

But who is a trafficker? The answer to this is to be found in Section 4 of the fairly recent Trafficking in Persons (Prevention, Suppression and Punishment) Act.

4 - (1) A person commits the offence of trafficking in persons where, for the purpose of exploitation, he -

(a) Recruits, transports, transfers, harbours or receives another person within Jamaica;

(b) Recruits, transports or transfers another person from Jamaica to another country; or

(c) Recruits, transports, transfers, or receives another person from another country into Jamaica.

To safeguard against bona fide cases of recruiting, emphasis is placed on the 'means' used to commit the offence. According to subsection 2, therefore, for the offence to be established, the actions listed above must have been carried out through any of the following 'means':

(a) Threat or use of force or other form of coercion;

(ii) a position of vulnerability;

(e) The giving or receiving of a benefit in order to obtain the consent of a person who has control over another person.

Another crucial element of the offence is the "exploitation" requirement. For the offence to be established, it must be shown that the recruiting, harbouring, etc, was for the purpose of exploitation. How then is "exploitation" defined? The definition section of the act provides the answer:

(a) The exploitation of the prostitution of a person;

(b) Compelling or causing a person to provide forced labour;

(c) Keeping a person in a state of slavery or servitude;

(d) Engaging in any form of sexual exploitation;

the act of trafficking

To connect the dots, therefore, the act of trafficking is committed when one recruits or harbours a person for the purpose of causing that person to provide forced labour ... and achieves this purpose through the use of threat or use of force.

A case in point is the recent case of the Crown against Rajesh Gurunani heard in the Supreme Court before Justice Courtney Daye. Gurunani was ordered to pay $4.5 million in damages and fines after being found guilty of human trafficking.

The prosecution led evidence in the case that Gurunani trafficked nationals from India between August 2009 and March 2011 and held them under "an environment of enforced control". The court was also told that the three victims in the case who were recruited from India to work with Gurunani were not paid their correct wages and that two of them suffered physical and emotional abuse from Gurunani.

Senior Deputy Director of Public Prosecutions Lisa Palmer-Hamilton said that the conviction sent a message that the Jamaican authorities are serious about prosecuting the crime.

Alas, this 2015 trafficking report would seem to suggest (albeit the report having been prepared before the convictions were handed down) that our American allies do not share Palmer-Hamilton's view that the Jamaican authorities are serious about prosecuting the crime.

Maybe it would help, though, if the police gave the prosecutors more work to do in this area. All those sex shops masquerading as massage parlours across the Corporate Area and making a nightmare of the lives of nearby residents should provide fertile ground for charges and convictions.