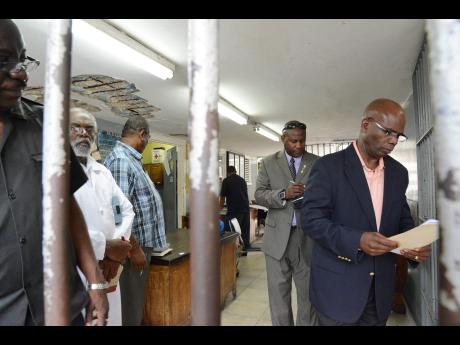 Rudolph Brown
Custos of Kingston, Steadman Fuller (right), leading a tour of the lock-up at the Kingston Central Police Station.

The police have started implementing emergency measures in a desperate attempt to keep police stations functioning normally despite the severe drought now affecting the island.

The Police High Command has already issued a reminder to members of the Force, particularly those at police stations with major lock-ups, to observe the water-conservation policy which is in effect.

With restrictions being implemented by the National Water Commission, several stations, particularly those in the Kingston Metropolitan Region, have been relying on the Jamaica Fire Brigade and other entities to supply them with water.

"We are expecting that members will live up to our conservation policy. We are talking about washing vehicles not as frequently as when we have rain, and to ensure that they use buckets," said Deputy Commissioner Novelette Grant, who heads the police Administration Branch.

Grant said with the drought affecting some stations, efforts are being made to ensure that they have a supply of water.

"All the people who we have called to assist us have responded. We have situations where some of the stations have sought and received help from corporate Jamaica," said Grant.

"We want our members to remember that we have a drought and water is not renewable. People must be very conscious," added Grant, days after Custos of Kingston Steadman Fuller asked justices of the peace to carry out inspections at some of the more problematic lock-ups in the capital city.

"In the best of times, they (police lock-ups) have challenges with some things, so I can imagine there being challenges with the drought. But I have not had any reports of any serious concerns with the water shortage as yet," said Fuller.

"Just as we speak, we are sending them (lock-ups) some disinfectants to ensure that we minimise any event that can happen. You know Kingston Central is our largest police lock-up, so that is one of the areas," added Fuller.

When contacted last Tuesday, Superintendent Michael Scott, who heads the Kingston Central Police Division, said there was no piped water at the main lock-up in the division, and he was awaiting the arrival of water trucks to fill some tanks.

"We are having it rough, just like everybody else, but we have trucks that bring us water from the NWC and so on, and we are waiting on them. We not bawling out as yet," said Scott.

The lock-up at the Kingston Central Police Station has a capacity of 176 inmates but is often times over crowded. When contacted last Tuesday, Scott declined to say how many inmates were being held in the lock-up at this time.

Over in the St Andrew Central Police Division, recently appointed head, Senior Super-intendent Millicent Sproul-Thomas, told The Sunday Gleaner that despite the drought, there has been no water issues.

In the St Andrew South Police Division, Senior Superintendent Richard Stewart lauded the Jamaica Fire Brigade for trucking the Hunts Bay Police Station, which holds some 90 inmates in its lock-up.

"We have water in the tanks, and we have more than one tank. We don't have a problem right now, but as soon as it (shortage) happens, we just ask the fire department, and they will respond before the day is finished," said Stewart.

Deputy Police Superintendent Ethel Halliman-Watson, who is in charge of the station which currently houses eight females in its lock-up, also argued that the drought is not having a major impact.

"I can tell you that water has been here from morning. Water is in the pipe, and in the event that the water is going low, by the time it is finished, there is usually somebody here," said Halliman-Wilson.