Raising the dead: Is science on the cusp of the unimaginable? 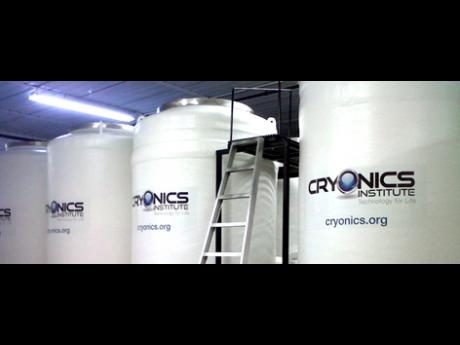 Contributed
The cryostats in which bodies are stored and preserved 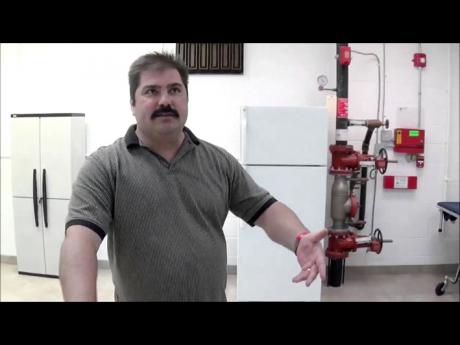 Jesus is said to have raised the dead, but before the Christian messiah, there were others of divine birth who supposedly performed this incredulous feat.

That such miracles occurred is a matter of faith. Frankly, it cannot be proven. But what if it can? What then, if science is on the cusp of the unimaginable?

It may not be that unrealistic as many might think. Just think about the gargantuan strides made in the medical field over the last century. Who would have thought that heart transplantation was ever possible? Who could have fathomed that bionic technology would be able to give sight to a patient blinded by macular degeneration?

Maybe we should hold judgement and sit on the fence as medical science attempts to achieve what was before unimaginable.

Intrigued by this subject, I sought the expertise of Dennis Kowalski, president of Cryonics Institute in Michigan, and a leading figure in this ever-growing field.

Cryonics is a bold, visionary procedure performed with the hope that one day, humans and animals can be revived with the right scientific breakthrough. It anticipates the prospect of immortality.

Kowalski spoke about the founding father of the movement, Robert Ellinger, a physicist who was influenced by science fiction of the 1950's that showed the preservation and resuscitation of the human body by a highly formulated freezing process.

That there is validity to this theory is undeniable. It is also scientifically proven that thoughts and memories are stored or imprinted on cells and tissues - our DNA.

"Our brain, neural pathways, and tissues are like a hard drive. Every information is still there," said Kowalski as he argued that is why the moment of death is so critical.

"Everything hinges on the next 24 to 48 hours. A standby team must respond immediately to ensure that brain cells and tissues are protected," said Kowalski.

The Cryonics Institute trains funerary directors, hospital and home attendants in the preliminary procedure of preservation. This involves cooling in an ice bath and injecting medications such as Heparin to allay coagulation of the blood. Interestingly, CPR is still performed to oxygenate the tissues.

The body is then shipped to Cryonics Institute, where a surgery is undertaken to drain the blood through the carotid artery. It is replaced with liquid nitrogen and then stored in cryostats.

Ellinger believed that hospitals would implement the technology but was proved wrong.

Today, several organisations adopting cryonics exist in the United States. While Russia boasts of a single organisation of this type, there is momentum for more.

Today, there are close to 150 bodies stored at the Cryonics Institute, with another 50 animals also in capsules.

Remarkably, close to 1,500 people have signed up to undergo the procedure upon death. That figure is expected to grow as more advances are made in stem-cell research, to a lesser extent, nanotechnology (the manipulation of individual atoms and molecules), and 3D biological printing.

Kowalski is guardedly optimistic. "Scientists can examine and explore what goes on in life at a molecular level, and can adapt and make adjustments, although the methods used are still crude."

He conceded that regardless of the outcome, science will benefit from this in-depth research. "The worst case scenario is that we fail, but science will be better off from this undertaking. We also cannot deny that efforts to preserve the sanctity of life is noble, and this is what this endeavour is all about."

Kowalski acknowledged the backlash that exists in some religious circles but is undaunted. He professed his Christian values and believed that the mission of his movement is consistent with biblical teachings.

"At first, there was a knee-jerk reaction to what we stood for, but a second look will show that we are upholding the fundamental Christian teachings. In fact, many years ago, transplantation of organs was said to be a desecration of the body by some. But didn't the Bible say to cure the sick, heal the leper and raise the dead? We are doing our duty and indeed treating the body as a temple," said Kowalski.

He rejects criticism of narcissism or materialism sometimes levelled against his group's mission. "The soul", he believes, "cannot be measured and is a nebulous and unprovable concept that is faith-based".

According to Kowalski, the scientific community is buoyed by the advances in hypothermic medicine, and this procedure speaks volumes.

"Brain surgeries are being performed where clinical death is induced. The brain is totally shut down, absolutely no brain waves. The patient is then brought back to life."

He argued that during that procedure, there is suspension of consciousness; and that has not been a verifiable case where the patient can recall any experiences during that period.

Kowalski, who also works in the medical field, has had first-hand experience of reviving individuals who were dead using CPR and defibrillation. He cited numerous cases of individuals trapped under ice, and unconscious for unbelievably long periods of time - literally dead - but revived.

Here, the low temperature slowed the degeneration of the cells. Basically, cryonics is attempting to apply the healing and preserving functions of nature.

Admittedly, reviving the bodies at Cryonics Institute demands much more than changing temperatures. The bodies are in a far greater state of disrepair and trauma, still, Kowalski and others are banking on stem-cell technology to repair ageing tissues and restore youth if ever the bodies stored at cryonics facilities are revived.

Stem-cell technology also allows for cloning, a contentious, ethical issue. But cloning, according to Kowalski, is part of nature as evident in identical twins. He stressed, though, that the thrust of cryonics is distinct from cloning.

Notably, Cryonics Institute distinguishes itself by its refusal to offer the neurocryo-preservation or freezing only the head of a person legally declared dead.

Although it is a cheaper procedure and enforces the motion that only the brain is the seat of all information and consciousness and should be prioritised, Kowalski believes that preserving the entire body offers a more realistic chance of revival. Further, 'neuro', as it is called, sensationalises cryonics as grotesque and ridiculous, and could be an affront to loved ones.

Kowalski set the record straight regarding the cost of cyro-preservation. "It is not geared for the rich as many think." Unlike other organisations that prove exorbitant, Cryonics Institute is markedly reasonable and is easily covered with life insurance. Further, the initial payment is invested to ensure, daily, long-term maintenance in a near full-proof environment.

But the end of any discussion on this subject, the $64,000 question remains: How far away is cryonics from recreating and directing life energy? Kowalski belies that within the next 50 to 200 years, we might be closer to immortality.

There are so many unanswered questions. What of the personality, identity, and yes, the soul? Where do they all fit in? And if Cryonics ultimately triumphs, how will the resurrected adjust to a new, highly unfamiliar era? As we ponder on these issues, the quest for immortality is well on the way.

- Dr Glenville Ashby is a social critic and president of Global Interfaith Council and the author of the recently published Anam Cara: Your Soul Friend and Bridge to Enlightenment.