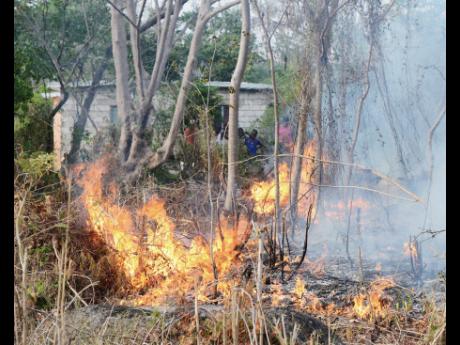 Careless hunters of wild hogs are among those being blamed for the bush fires which have affected some 405 hectares of forest reserves since May.

In its a preliminary assessment of the recent fires, the Forestry Department added the wild hog hunters to farmers using the outdated slash-and-burn method to clear their fields and persons who set up haphazard electrical connections as the humans behind the fires which razed sections of St Andrew and St Thomas.

"We have wild hogs in the forest reserves, and persons will go into these areas illegally to hunt wild hogs and other animals," said Damart Williams, enforcement officer at the Forestry Department, the agency in the Ministry of Agriculture with responsibility for managing and maintaining the country's forest resources.

"What you find is that in the process of hunting and being there overnight, these individuals will set up camp sites with fires cooking, and that results in a fire," said Williams.

"All of the activities, being in the forest reserves ... lighting fires ... hunting hogs ... are all offences under the law," added Williams.

According to Williams, the Forestry Department is determined to do its part in hunting down and prosecuting offenders in accordance with the laws governing the protection of Jamaica's forests.

He noted that no arrest has yet been made in connection with the fires as the investigators face several challenges in their efforts to determine who or what sparked the blazes.

"There are a number of factors against us with regard to identifying the responsible parties. When a fire starts, the end product is what you actually see, it's not something that you can go to a community and find out who the person responsible is," he said.

"We ask questions but persons are very reluctant to pass on the information to us. As it is now, it is difficult for us to just go to an individual and arrest them. The evidence that we have against those individuals is in most cases somewhat insufficient and does not give us any grounds for arrest," added Williams.

He said the Forestry Department believes persons hunting wild hogs were behind a fire which damaged five hectares in the John Crow Peak.

That area, along with the Greenwich Trail section of the Blue Mountain Forest Reserves, was affected by four fires between June 5 and July 9.

More than 35 hectares of forest lands in the Greenwich area was affected, while damage assessment is still being carried out in regard to the nearby Chesterfield Forest Reserve, which was also significantly damaged.

In an earlier set of fires in Mavis Bank in May, the Forestry Department revealed that 366 hectares of forest reserves were affected. The areas included Bellview, Flamstead, Orchard and Petersfield.

The Forestry Department has also underscored the devastating effects of fires on the forestry reserves, noting that these increase the chance of landslides due to runoff during rain rainfall, especially in areas where the hillside is exposed.

"This poses a significant threat to communities and physical infrastructure in the lower reaches of the watershed area. In addition, there is likely to be a reduction in the fertility of the soil resulting from the loss of nutrients, which further compounds future attempts to establish forest cover in these areas."

Williams said that in response, the agency has been embarking on a string of public-education campaigns aimed at dissuading individuals from certain traditional practices that commonly lead to fires.

So far, the public-education efforts have not taken off as well as planned, but Williams remains hopeful that persons will take heed as the dry season continues.