Lascelles Chin Gets Medal of Distinction 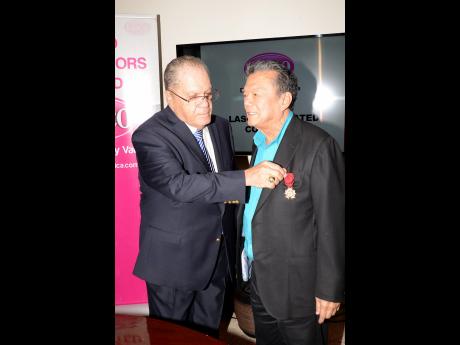 With more than 25 years at the helm of LASCO Distributors and some five decades in business, Lascelles Chin, founder and executive chairman of the LASCO Affiliated Companies, continues to be recognised for his outstanding contribution to the Jamaican economic landscape.

At a ceremony at the new dry blend and liquid manufacturing plants of LASCO Manufacturing Limited in White Marl, Spanish Town, the medal was presented by FICAC president Honourable Arnold Foote before an audience of notable ambassadors and dignitaries.

Foote noted that, "One of the most important functions of a consul is the development of trade, and the FICAC recognises that Chin has built a brand and a business that are ingrained in the DNA of Jamaicans everywhere."

"His commitment to providing quality, affordable products to Jamaican families has seen LASCO's manufacturing and distribution of more than 3,000 products along a wide spectrum of categories, including but not limited to beverages, cereals, canned foods, condiments, baby products, personal care, pharmaceuticals and household products," Foote highlighted.

The prestige of such recognition was not lost on Chin. With more than 90 countries and 18,000 individual consuls as members, the FICAC, which was established in 1982, is the oldest institution serving international bilateral relations. Chin, whose business distributes products not only in Jamaica and the wider Caribbean, but also in the USA, Canada, United Kingdom and Central America, gave his guests a tour of the new and expanding facilities of his operations.

This recognition follows honours and awards that Chin has received from the Jamaica Chamber of Commerce, the Roche Quality Awards and the AMCHAM Jamaica Awards of Excellence for Corporate Social Responsibility, in addition to induction into the PSOJ's Hall of Fame and other recognition and salutations for his entrepreneurial efforts, business acumen and local outreach efforts.

From his humble beginnings in rural Jamaica to once being Jamaica's largest trader of black pepper, to being named Jamaica's Most Admired Business Leader, Chin has blazed a trail for the past 50 years with no signs of slowing down.

In his expression of gratitude, Chin revealed that the company was in a rapid state of growth, with no signs of slowing down. With the new manufacturing facilities and major upgrading of the warehouse at the White Marl location and the launch of LASCO's latest product, iCool, the company is poised for even greater heights.