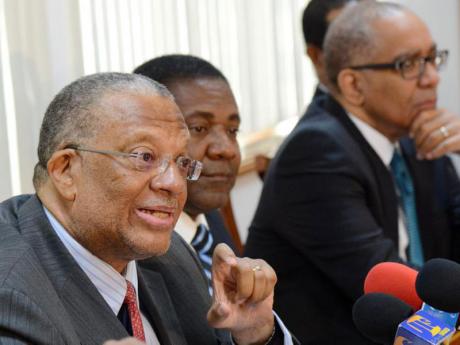 Finance Minister Dr Peter Phillips has suggested that some members of the Opposition appear to be willing to see things get harder for Jamaicans in their bid to get power.

Speaking at a press conference today, Phillips expressed concern about the level of pessimism in relation to the Petrocaribe debt buyback.

He also dismissed assertions by the Opposition that the government is planning to use money from the Petrocaribe Development Fund to finance election activities.

According to Phillips, government will not divert from fiscal prudence.

Dr. Phillips said the US$2 billion PetroCaribe debt buy-back loan will have the effect of lowering Jamaica’s debt servicing by just under US$300 million over the life of the transaction or over a 30-year period.

In addition, Phillips said the money used to fund the purchase of the PetroCaribe debt requires that for the first 10 years, the Government will only make interest payments with no principal payments.

He said the transaction will allow Jamaica to reduce its debt to GDP ratio by 10 per cent.

The Opposition has attacked the decision arguing that taxpayers will be burdened with repayments of millions of dollars a year because the government raised money at high interest rates to clear a debt that had an interest rate of just under two per cent interest.

Phillips contended that while the government would welcome the cheapest possible financing for the debt buy-back transaction, it was simply not possible to access a loan from the multilaterals as the opposition has suggested.

Phillips also said the debt buy-back transaction will in no way require the imposition of higher taxes on Jamaicans.