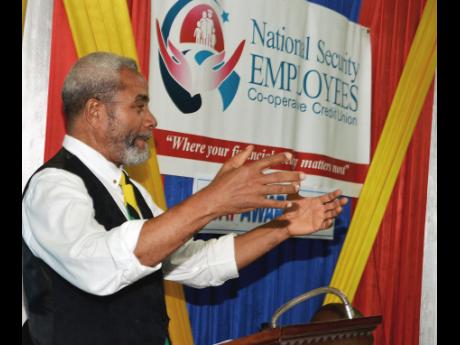 Senior adviser to the Minister of Education, Dr Franklin Johnston.

Senior adviser to the minister of education, Dr Franklin Johnston, is urging students to ensure they master the English language, as this is one skill which demonstrates their competence in many areas.

"It is extremely important to your future that each of you master English, because you are not just going to remain here, you're going to go right up to the top of some organisation ... you're going to go abroad, and one of the things that will always serve you well is if you know your English well, you speak it well and you can do it well," he said.

The senior adviser shared with the students that he has worked in many countries around the world and English "is one thing that takes me through, because no matter what your skill or expertise, you have to be able to communicate with people".

He noted, however, that having a command of English does not mean they cannot speak all the other languages, including Jamaican creole, "but what it means is that you want to know you have one thing that you do well, because it opens doors for you."

In the meantime, Dr Johnston congratulated the scholarship awardees on their achievements and encouraged them to enter this new phase of their lives with a sense of purpose. He also reminded them to have faith, work hard and continue to strive for success.

The senior adviser also praised the credit union, which has provided more than $7 million in GSAT grants since the inception of the awards programme.

For the past eight years, the credit union has awarded children of members with yearly grants ranging from $10,000 to $20,000 per child.

The credit union hosts the function each year in honour of students who are successful in the GSAT exams and also assists parents to offset some of their back-to-school expenses. A total of 66 students were awarded this year.