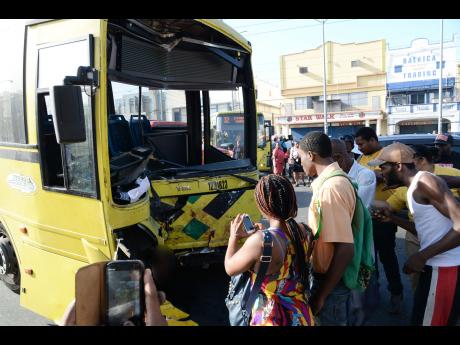 Jermaine Barnaby
Onlookers take pictures of the JUTC bus after it was removed from a building into which it crashed this morning, killing one man.

The Mayor of Kingston, Senator Angela Brown Burke is reporting that the vendor killed in this morning's bus crash in West Parade, downtown Kingston, was selling in a no-vending zone.

Brown, describing the fatal crash as unfortunate, said it has brought into sharp focus, the need for order in the busy business district.

According to Brown Burke, while the police have been doing a good job of keeping the area under control, it's time for a re-examination of the arrangements in downtown Kingston.

The vendor died on impact around 6.30 this morning when a Jamaica Urban Transit Company bus ploughed into a car then slammed into him and a building in the vicinity of Burger King on Orange Street.

The head of the police Traffic Division, Senior Superintendent Calvin Allen says four other people were injured in the crash.

*CORRECTION: Previously, this story had said the victim was a fruit vendor. This is not correct. He, in fact, sold slippers.