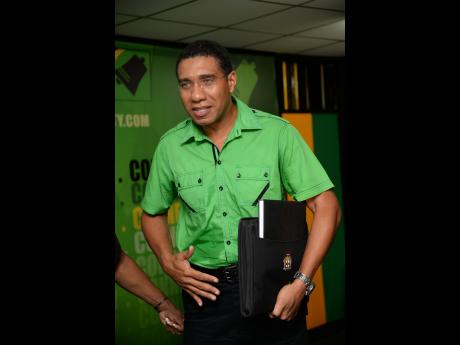 Andrew Holness is to remain as Opposition Leader.

After a tense four and a half hours, 19 of the 21 Opposition Parliamentarians emerged from a caucus at Belmont Road in what appeared to be a united group.

There were loud cheers as Holness, who is also the Jamaica Labour Party (JLP) leader emerged to greet supporters.

Leader of Opposition Business in the House of Representatives, Derrick Smith, who presided over the meeting, said Holness had presented a programme to usher the JLP to victory in the next election.

However, none of the MPs would give any indication whether they were opposed to Holness’ leadership.

Earlier, tensions had gripped the JLP Belmont Road headquarters as supporters began to arrive ahead of the MPs.

But they were told by security personnel that they would not be allowed to enter the premises.

The meeting, initially, scheduled to get underway at 10 o'clock in the morning was postponed by an hour.

At 10: 50 a.m. the MPs began their arrival with the tinted windows of their motor vehicles wound up.

JLP General Secretary Horace Chang emerged to address the tense gathering as news circulated that some of the supporters were clashing with members of the media.

Members of the media were later invited inside the headquarters and were told that the status quo would remain.