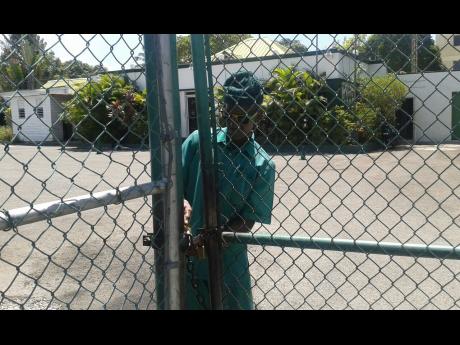 Jermaine Barnaby
A man closes the gate of the compound of the Jamaica Labour Party.

Members of the media have been barred from the Jamaica Labour Party (JLP's) Belmont Road headquarters where it's Parliamentary Caucus is meeting to consider the fate of Andrew Holness as Opposition Leader.

This was not the case last week Friday at the Belmont Road headquarters.

A member of the security team told The Gleaner that he has been instructed not to allow anyone to enter.

After more than six hours last week, JLP MPs failed to reach a consensus on the fate of Holness and so another meeting is being held today.

JLP MPs select the Opposition Leader, but the party leader must be elected through the party's machinery.

The last time that the offices of Opposition Leader and Party Leader were held by different people was in 2006 when Ken Baugh led the Opposition and Bruce Golding took over as Jamaica Labour Party leader.

At the time, Golding was not a Member of Parliament and so he could not be the Opposition Leader.

All of the caucuses that the JLP has had over the last year have been to question Holness on his management of the party.