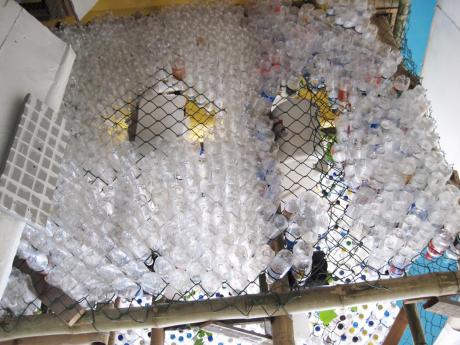 Shanique Samuels
A section of the greenhouse plugged with plastic bottles. 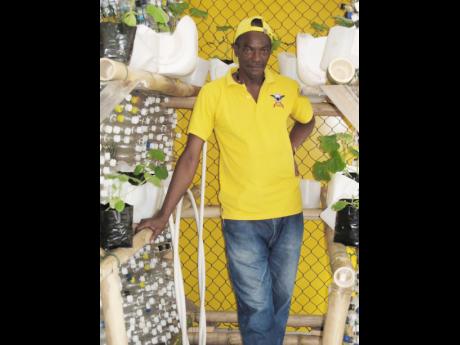 Jamaicans are naturally a creative set of people, and a greenhouse with walls made of plastic bottles is just one of many innovative creations that was on show at the Denbigh Agricultural, Industrial and Food Show recently.

Agricultural science teacher at the Charlemont High School in St Catherine Norman Blair came up with the idea after the school was approached by the Rural Agricultural Development Authority with the theme 'Youth Involvement with Innovation'.

"The innovation is making use of plastic bottles, which is becoming a nuisance in our environment nowadays. So instead of disposing of the bottles, we just find innovative and creative ways to show people how they can attempt to correct the problem and make good use of all the plastic bottles that people just throw away," said Blair.

The frame of the structure is made out of bamboo, which is then wrapped with a perimeter fencing wire. The spaces in the fence are then plugged with the plastic bottles. Blair said plugging the holes will also allow a fair amount of light into the greenhouse. The larger five-gallon bottles are also used as plant boxes, which are placed on shelves.

Blair said many of those who visited the St Catherine Pavilion were amazed at the idea and wanted to know how they could put up something similar in their homes or on their farms. "The response was overwhelming. Everybody wanted to take pictures because it catches everybody's eyes. The people were very enthused. I hope the people will use the idea because it would help Jamaica in a big way because at least it will get rid of a lot of the plastic bottles that we see littering the island, and we all know plastic doesn't rot easily, so why not make use of them. Furthermore, plastic bottles last long, so it just means the walls of the structure will also last long," he commented.

Blair said the hardest part of putting the greenhouse together is to gather the number of bottles needed to plug the holes.