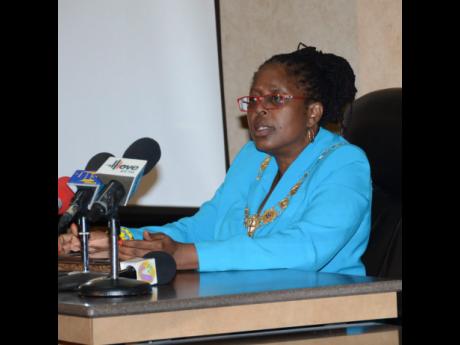 Kingston's Mayor, Dr Angela Brown Burke, has indicated that Monday's killing of a vendor in downtown Kingston has highlighted the need for persons to adhere to the stipulations outlined by the corporation, regarding illegal vending.

Delroy Roberts, a slipper vendor of Jones Town in downtown Kingston, was crushed and another person injured by a Jamaica Urban Transit Company passenger bus at West Parade.

Roberts was hit and pinned against a column close to where he sold his footwear, which is a no-vending area.

Speaking at the Kingston and St Andrew Corporation's monthly meeting that was held at its offices in downtown Kingston yesterday, she noted that the corporation would be cracking down on irregularities that occur.

"I want to express condolences to the families who have lost loved ones, regardless of the circumstances, because the loss of a loved one is always a traumatic. However, the incident is a stark reminder of the dangers associated when vendors occupy our streets," she said.

"I want to also remind us that every time we stop to buy from a vendor who does so illegally, we too, with our actions, put others at risk and make our environment a less safe space. It is important that we think about that, because often when we try to clamp down on this practice, we are seen as putting down the 'likkle' man and not see the importance of safety and order," Brown Burke declared.

The mayor said the vendor registration programme, in which vendors are expected to register by August 31, will be enforced. The aim of this programme is to ensure that all vendors operating within legal areas are registered to operate legally. The initiative will target persons engaged in vending activities within the formal markets and designated vending areas in Kingston and St Andrew.

"We began with 13 persons on July 23. So far, we have been focusing on Pearnel Charles Arcade, Coronation Market, Oxford Mall Arcade, Darling Street transportation centre and the Queen's Market," The mayor told the gathering.

"In fact, later this week we will take a look to see what changes can be made to different elements of the programme as we have it. Notwithstanding this analysis, I want to remind vendors that in the same way you need a driver's licence to drive on the nation's streets, vendors will require registration to sell," Brown Burke charged.