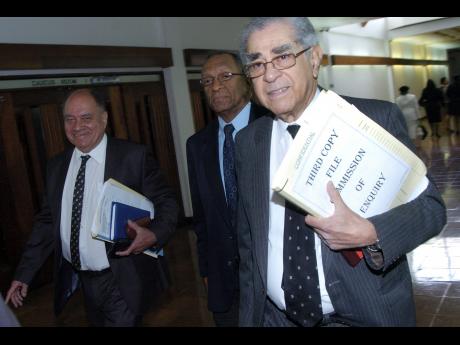 Long before he was thrust into the public spotlight in 2010 by being charged with the responsibility to probe the affair concerning the retention of the American law firm that handled the extradition case against notorious West Kingston kingpin, Christopher 'Dudus' Coke, attorney-at-law Emil George, QC, had already distinguished himself as a specialist in national fact-finding missions.

From as early as the 1960s, and against the background of rising complaints from consumers, George had served as chairman of a committee set up by Government to enquire into the Hire Purchase Law and related credit matters. During the decade of the 1970s, George's name became associated with several other commissions, particularly those assembled to examine labour disputes involving both private- and public-sector workers. In the most noteworthy of these cases, he chaired the team appointed in 1979 to query the conflict arising from a claim by the Dockers and Marine Workers Union to join the National Workers' Union and the Bustamante Industrial Trade Union in representing workers at the strike-plagued Jamaica Railway Corporation.

As president of the Jamaica Employers' Federation during a particularly turbulent time on the labour front during the 1980s, George made a plea for the Government and the trade unions to exhibit what he termed "a spirit of compromise and flexibility" that would see them not attempting to settle their differences in the media or by way of making inflammatory statements, but by showing consideration and trying to see the other side's point of view. He also cautioned both entities to observe the law at all costs. George was a strong supporter of the Industrial Disputes Tribunal and continually called on dissenting parties to accede to the decisions of the arbitrating body.

George had achieved both prominence and popularity in the 1970s on the well-received and critically acclaimed weekly panel discussion programme 'The Verdict Yours', carried on the Jamaica Broadcasting Corporation (JBC) TV. First aired in the 1960s, the public affairs telecast was billed as a show "to stimulate thought", and George did not fail to live up to its mandate. Two other esteemed attorneys, Harvey DaCosta and Frank Barrow, were George's co-panelists in the revival of the programme that premiered on February 15, 1970.

In 1971, George was one of the first public figures to rally for the appointment of an ombudsman. He noted at the time that there was a limited number of ways in which a Jamaican citizen could register a grievance against the State, and that there were few means of redress if such applications were delayed, thus causing the individual to suffer financial loss. He cited possible instances of medical negligence where ordinary people would be at a disadvantage in seeking recompence, while they endured physical and emotional suffering, and cases where entrepreneurs would lose out on lucrative business opportunities owing to the protracted period of time it took to grant the necessary commercial licences.

The 1948 Dominican Scholar, George left his native Dominica to pursue studies at Magdalen College, Oxford, England, and graduated with a Bachelor of Arts degree in 1953. He earned his Bachelor of Civil Law the following year. While at Oxford, George won the Underhill Prize in Law in 1952 and also received a scholarship from the prestigious Gray's Inn in London to study under a noted barrister. He was called to the bar at Gray's Inn in 1954 and admitted to practise in Jamaica in 1958.

George was appointed to the Senate in 1984 and was an ardent advocate of income tax reform, suggesting that income tax should be reduced and a value-added tax be applied to consumer goods, with the exception of basic commodities, clothing and shelter.

In October 2010, George was selected by then Prime Minister Bruce Golding to chair the three-member commission of enquiry to investigate matters surrounding the extradition request for Coke and the events leading to the contracting of the United States law firm Manatt, Phelps & Phillips.

A father of two, George was predeceased by his wife, Dr Pamela Ann George, a physician, in February 2013.