McPherson family is cooking up a storm 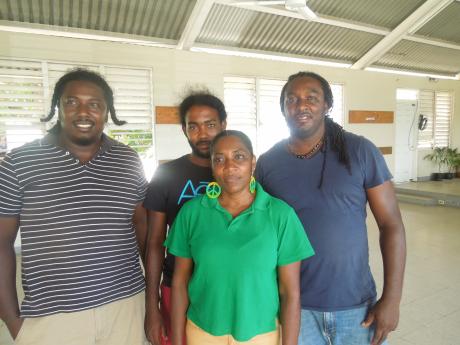 If Barbara Bush were right when she said "togetherness is a very important ingredient to family life", then the McPherson family is cooking up a storm, figuratively and literally.

The family from the Duhaney Pen Community in Morant Bay has been doing everything together all their lives.

"Our parents had 10 of us and we all grew up under the same roof," said Samora, one of the seven McPherson men.

The family revealed that they share similar talents and interests and hope to maximise on these abilities to make a living.

"We cook for events when people ask us to. Though it's not yet official, we plan on making it into a business as soon as we can pinpoint a certain amount of reliable clients," he continued.

Among their many talents is the family's ability to prepare meals that are "beyond satisfying".

"Our parents used to have us in the kitchen while they cooked. We all grew up around the stove," interjected Curlinton, another of the brothers.

Admitting to their expertise in Jamaican food, like curried goat, French fries and chicken, jerked pork, the McPhersons revealed that they also experiment with a little Indian cuisine.

According to them: "We sometimes cook dahl, bhat, roti and mango takari."

Most of the cooking happens from the comfort of the McPherson's kitchen, and the aroma of their work is said to permeate the community.

"We also make natural juice from fruits such as June plums, cherries, pineapple and so on," disclosed another of the McPherson clan.

"We're popular in the streets, but we don't really push it that much because we do our other work."

With plans of turning their hobby into a business, the relatives hope to open a restaurant next year "if all goes well".

Cooking is just one of their endeavours.

"The men in the family also know how to do trowel-on. It's a good trade to have because it's taking over from painting nowadays," Curlinton told Family and Religion.

When asked how they learnt to do this, he responded that an older brother went out and "learnt the ropes" and came back and taught the rest of them.

The chemistry among the family could be seen in the way they communicated.

According to them: "We have a good family. Our parents grew us good and we love working together. We're a team and no one is left behind. "Proving that there's no end to what the McPhersons can do, they laughingly said: "We make furniture too and sell clothes."

Family and Religion wanted to know about leadership in their union, but the McPhersons were quick to erase the idea.

"No one is concerned about being the leader. We believe we're all leaders. The thing is everybody is capable of doing their job and doing it well, too, so no one needs to be supervised," they said as they beamed with pride.