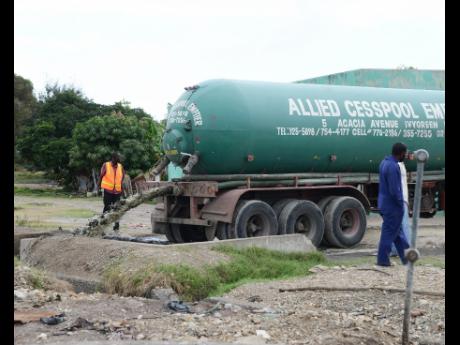 If acting president of the National Water Commission (NWC), Mark Barnett, is true to his word, members of Greenwich Town community in south west St Andrew could soon be breathing easier.

Barnett has promised that the NWC will be taking steps to reduce the stench which has been blanketing sections of Greenwich Town from a major sewage-treatment plant located in the community.

"It is something I am very much aware of, and I really consider as problematic, especially because the school (Greenwich Town All-Age) is in close proximity, and the impact on the kids," Barnett told The Sunday Gleaner, while promising that action will be taken before the start of the new academic year.

"There will be some improvement. It won't be entirely solved because school will be open in another three weeks."

Among Barnett's plans is to have a much better control of waste disposal at the site and to put in formal infrastructure to enclose the facility.

"What we will do temporarily is ensure the facility does not create the nuisance in and around the general locale as it is," said Barnett.

"We have to ensure that the truckers use their hose as the appropriate means to discharge the liquid content that they're transporting. As it is now, they usually just come, open up a valve, and everything splashes all around. So once you ensure that you control disposal, you limit any possibility of any airborne particulate that may contain any bacterial cells."

Another measure that will be revisited is the use of white lime stones to create an oxidising environment that will suppress the odour from the waste.

One of the biggest challenges that the NWC has been faced with over the years is getting the truckers to conform to a particular time frame for disposal.

"It is very challenging to do that. In a recent visit to the location, and speaking to some community members, they themselves will be playing a key role to ensure that once the facility is closed, there are no trucks coming in there," said Barnett.

The health threat poised by the sewage-treatment plant, dubbed a "potential hazard" by head of the School of Public Health and Health Technology at the University of Technology, Professor Winston Davidson, was moved back to the front burner by The Sunday Gleaner in March.

At that time, children were seen playing on a field metres from where trucks were dumping raw sewage. At that time, residents were adamant that the plant should be shut down before it caused an outbreak of diseases in the community.

But Barnett argued that removing the plant is not an easy task.

"To immediately remove it will pose some challenge, although it is not something that cannot be done; the question is where should it go? There's the argument that it should be moved to Soapberry.

"Again, there are a number of other issues relating to that. You'd have to put in an infrastructure that will allow for adequate mixing of this high-strength waste to the normal 'fresh sewage' coming into the plant. There is a great level of dilution of the high concentrated effluence going into Soapberry," said Barnett.

He argued that what has to be examined is the level of infrastructure necessary to facilitate the trucking of undiluted sewage directly to Soapberry. But Barnett noted that this will require significant funding, and will take some time.