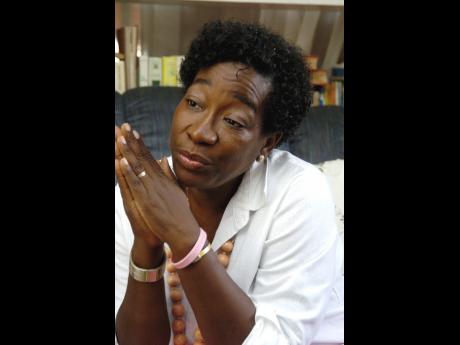 Recent reports of girls resorting to violence to solve interpersonal conflict in schools are causing concern for at least one social-work expert who is convinced that the number of cases is much more than reported.

"The schools try to gloss them over because they are embarrassed; they don't want their reputation to be affected," charged lecturer in clinical social work at the University of the West Indies, Mona campus, Dr Claudette Crawford-Brown.

"In doing that, it results in their school not being put in the spotlight. The reality is that it is happening in all the schools and we have to face up to the problem."

According to Crawford-Brown, it appears that girls are becoming far more violent, but even more alarming is the fact that society has come to accept this as normal.

"I am privy to a case of a situation in a primary school where a girl under 12 attacked a boy who was her same age and basically tackled, pushed him to the ground and kicked him severely, drawing blood," said Crawford-Brown, as she explained that the girl was infuriated by the boy's refusal to be her friend.

"When you have children who are directly involved in such violence, it's a danger sign and a warning sign that the society has gone over the edge and we should be concerned," added Crawford-Brown, who lectures in the Department of Sociology, Psychology and Social Work.

Just a few weeks ago, The Sunday Gleaner reported the story of a 13-year-old male student from Yallahs High School in St Thomas being ganged and severely beaten by four of his female schoolmates.

The girls later stated in court that they were only playing when they kicked, stomped and boxed him. Prior to this, there was also a report of eight disruptive girls from The Queen's School being booted following their involvement in a series of criminal activities on and off the school compound.

While The Sunday Gleaner brought these two cases to the public's attention, Crawford-Brown argued that there is a need for the implementation of special after-school programmes aimed at helping these students.

Having spent more than two decades implementing violence-prevention programmes in schools in Jamaica and several other Caribbean countries, Crawford-Brown believes that a multisectoral approach needs to be taken in tackling the problem.

She is concerned that while several projects and documents have been produced focusing on violence prevention in schools, there is hardly any follow-up to see what has been achieved.

"The ease with which children are resorting to violence as a way of dealing with normal interpersonal relationships is highly abnormal. What is happening is that they are mimicking what they are seeing in their communities and in their homes. Early intervention is needed for children with these issues,"