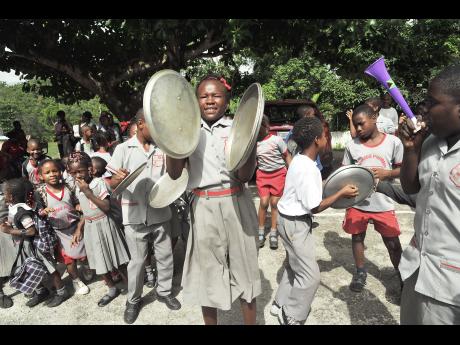 Just three months ago, the small community of Padmore in west rural St Andrew was the scene of jubilation, as residents celebrated the success of the students who excelled in the Grade Six Achievement Test (GSAT) and were awarded places at prominent high schools such as Campion College and Jamaica College.

But the joy that encompassed the community has since been replaced by despair, as like so many other parents across the island, the high cost of a

secondary-school education is proving a challenge many cannot overcome.

"I don't have a dollar. All I could buy for him are some notebooks," Jasmine Whyte, whose son has been placed at St Mary's College, told The Sunday Gleaner. "The school fee is like $7,000, and I don't have any money to buy things like uniform."

Whyte, who is a mother of three, with her eldest son's studies in fashion designing also derailed because of the cost, said her youngest child is a

beneficiary of the Programme of Advancement Through Health and Education (PATH), but she has been told he cannot get assistance until he goes to orientation at his new school.

Susan Henry, who is also a mother of three, said her son was placed at Jamaica College, where the school fee is said to be $31,000 and $5,000 for registration.

The school has offered her the opportunity to establish a payment plan, but she said she is unable to find the first down payment.

Another mother of three, Tavia Cornwall said she and her husband have been trying their best to do what they can, but they are in need of help to put everything in place for their daughter to take her place at The Queen's School.

"The school fee is $28,000. The school has a payment plan, and they say I can come in and pay $4,000, and I went in and made a down payment, and they give me until December (to finish paying the rest)," said Cornwall.

"I got three books from somebody, and the one book on it leave, is $2,600 for it. I got a sponsor for one of the uniform, but I need some help with the school fee, and she is going to want some more uniforms."

What makes the Padmore Primary story more distressing is the fact that in 2011, the 75-year-old institution was earmarked for closure before principal Keisha Hayles and her staff, in collaboration with the students, parents and wider community, transformed the institution into one of resounding success.

Hayles said she intends to repeat the feat of having all her GSAT students gain placement in prominent high schools and, therefore, a long-term plan needs to be put in place.

"There must be a scholarship fund where they can draw from, so it is not a one-time help that they need, because we don't want them to be going to school two, three times a week," said Hayles.

But Minister of Education Ronald Thwaites argued the problems facing the parents of students from Padmore Primary are not unique to them and is sometimes not only a result of poverty.

"There are many students all over Jamaica who have difficulties for a number of reasons," said Thwaites.

"One is because their parents are weak economically, and two, sometimes they haven't made any provisions in terms of saving for the event. School is the most important expenditure that a parent can make for a child, apart from nutrition.

"The issue is a substantial one; I am not trying to argue it away, but one which can be alleviated."

According to Thwaites, the parents should not despair, as the schools have considerable assistance packages that they offer; while those on PATH do not have the obligation of auxiliary fees, as the Government will pay a portion of those, and the rest will be remitted.

He noted that many corporate entities offer scholarships to GSAT students, while Members of Parliament expend in the region of 60 per cent of their Constituency Development Fund at this time on student assistance, particularly for those going to high schools.

The education minister also emphasised that "none of the children who have been assigned to high schools, whose parents genuinely cannot afford, should be excluded for September morning."

See the member of parliament's response on Page A10.