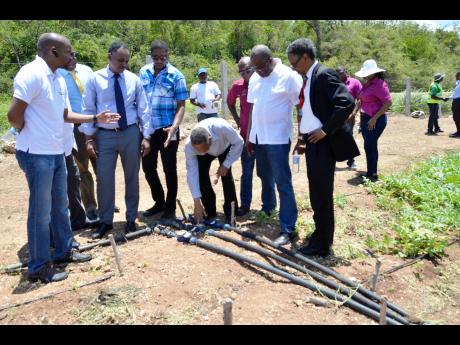 Contributed
Agriculture, Labour and Social Security Minister Derrick Kellier (4th right) inspects drip irrigation pipes on the Braco Farms in Trelawny during a tour on August 13. The irrigation system is part of an $11.7 million project funded by the Jamaica Social Investment Fund (JSIF), which includes establishment of a food-safety facility on the farm. Others looking on are managing director of JSIF, Omar Sweeney (3rd left); State minister in the Ministry, Luther Buchanan (2nd right); and Member of Parliament for North Trelawny Patrick Atkinson.

Eighteen small fruits and vegetables farmers at the Braco Farms in Trelawny are benefitting from the installation of a drip irrigation system.

The Jamaica Social Investment Fund (JSIF) provided funding for the $11.7 million project, which included the establishment of a food safety facility, where the farmers can package and store their produce, which includes watermelon, cantaloupe, sweet pepper, onion, and scallion.

JSIF officially handed over the project to the farmers on Thursday, where the entity signed a memorandum of understanding (MoU) with the National Irrigation Commission (NIC) for the supply of water.

"I am confident that this project will go a long way in enabling improvements in agricultural productivity and production through the provision of affordable irrigation services to our farmers," he said.

He noted that Braco Farms is ideally located between two major development projects, which will provide opportunity for farmers to market their produce.

"This project is located at a very important place. You are between the (Melia) Braco Resort that is next door and you are at the other end of the Harmony Cove development. It is significant that you have a project here that has been concentrated mostly on the production of vegetables because that is one of the product lines that the hotels need more than anything else," he said.

"You can produce to support the hotel next door, rather than for things to come from further afield. It puts you in a position to supply your produce much cheaper because there is less transportation cost," Kellier said.