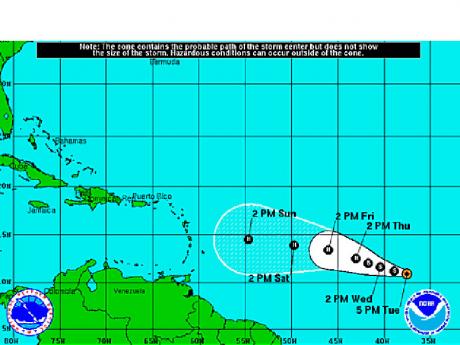 A new Tropical Depression has formed in the Atlantic and meteorologists say it could develop in to a hurricane by Wednesday.

If the system becomes a hurricane, it would be called Danny.

However, Evan Thompson, the head of the weather branch at the Meteorological Service of Jamaica, say the system is not a threat to Jamaica at this time.

Tropical Depression Four formed in the eastern Atlantic Ocean about 1,665 miles east of the Windward Islands.

The depression is forecast to strengthen into Tropical Storm Danny by later Tuesday or Wednesday as it moves slowly to the west-northwest.

This is the first active tropical depression in the Atlantic this season which runs from June 1 to November 30.

“We are watching it, I wouldn’t want to encourage anyone to worry but to be prepared. It could become a threat, but at this time it is not considered a threat. It’s in an area that it could pose a threat but it is so far away, it’s actually 2500 kilometers from the lesser Antilles, but anything could happen," Thompson said.

"While we are not sure how close it will get to Jamaica, the forecast is that it could get pretty close to the Caribbean,” he said.

The 2015 Atlantic hurricane season is projected to be one of the least active since the middle of the 20th century.

The forecast for this year is for seven named storms, compared to the average of 12.

Three of the storms are expected to develop into hurricanes.