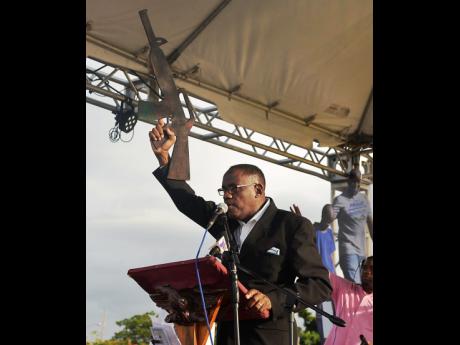 While the organisers of Sunday's 10,000 Men and Their Families March in Montego Bay, St James, might not have attracted the numbers of participants they had anticipated, their message to the criminals creating havoc in western Jamaica was quite simple: repent or die.

"Statistics at the University of the West Indies shows that there are just 4,000 to 6,000 men and women in Jamaica involved in wrongdoing," said Dr Bishop Rowan Edwards, founder of the 10,000 Men and Their Families March. "The statistics also show that there are 2.7 million Jamaicans in this country, so why should we sit down and watch the devils mash up our country? Why should we sit down and watch them killing off our young people? Too much bloodshed [is] in Montego Bay, and we have to stand up as people of God."

"Seventy-five per cent of our children right here in Montego Bay are growing up without a father ... all because some 'dibby dibby' wicked men decide to live by the gun," Edwards continued. "Let's send a message to those who are determined to destroy lives to let them know that they must repent, turn from their wicked ways or die ... . I said repent or die!"

The march, which was held under the theme 'Standing up for Peace, Family Life and Protection of Children', saw four groups of persons marching from four different locations to the Dump Up Beach, in Montego Bay, where several speakers spoke to the gathering.

While the church community seemingly forgot their denominational differences and spoke against the escalation in crime with one voice, National Security Minister Peter Bunting, who spoke at the event, made it clear he was impressed that the protesting Christians were seemingly more vocal about all other issues, except lottery scamming.

"St James has a murder rate of almost three times the rest of Jamaica, (and) second to St James is Westmoreland, and next to Westmoreland is Hanover," Bunting said. "Year to date, there is no increase in murders in Kingston, in St Andrew or even in St Catherine, but St James, Westmoreland, and Hanover are responsible for most of the murders taking place in our country today."