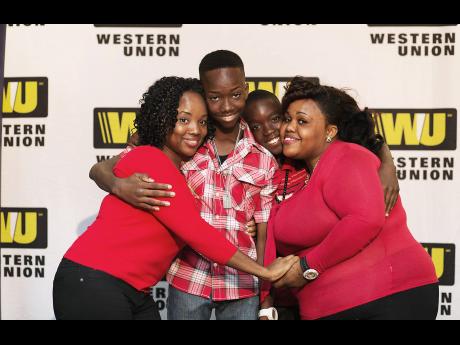 Contributed
Kadian McGhan (right), winner of the Western Union promotion, shares a happy moment with ( from left) her sister Staci-Ann and nephews Shamarie and Jtwayne who will join her on the all expenses paid trip for four to Disney World.

Kadian McGhan had just left the Western Union location along Washington Boulevard when she got the phone call advising that she could be the lucky winner of a trip for four to Walt Disney World, courtesy of Western Union. At first, she was shocked and even after stating the tagline for Western Union's summer promotion and being confirmed as the winner, the hairdresser from Drewsland remained in doubt that she could be so lucky.

"I thought to myself...is this for real? And even after I told my sister, I still couldn't believe my luck. I thought it was a prank." Kadian said. "I didn't believe until when they invited me to the presentation function. That was when it finally dawned on me that I had won! I won!" she stated ecstatically.

Kadian won a trip for four to Walt Disney World (inclusive of Disney World Park entry tickets), round-trip travel for four on JetBlue plus US$1,000, courtesy of Western Union simply by receiving a qualifying Western Union Money Transfer transaction during the promotional period from May 11 - June 30, using her MyWU Card. The grand prize also includes ground transportation to and from the Sangster International Airport and the Orlando International Airport, four days-three nights hotel accommodation and an Alamo car rental.

According to Vinette Rowe, GraceKennedy Remittance Services marketing manager, "Western Union's Moving Money, Making Magical Memories" promotion is another way of thanking and rewarding our customers for making us their choice for receiving and sending money transfers."

Kadian will be taking her sister, Staci-Ann McGhan, and her nephews, Jtwayne and Shamarie, with her.

"JetBlue is delighted to have played a role in making McGhan's dream come true. Our mission is to inspire humanity, and our partnership with Western Union helped us to make a difference in someone's life," said Leslie Brown, general manager of Jamaica and Grand Cayman for JetBlue.