Munro's best days are yet to come, says new principal 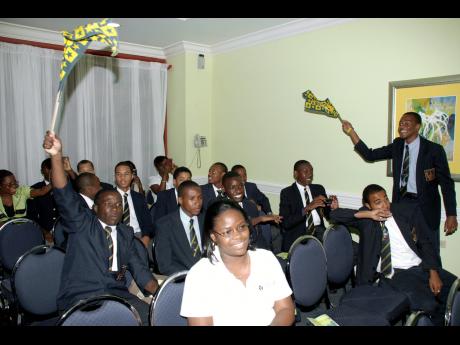 Contributed
Munro College students cheering on their team at a debating challenge.

Mark Smith has developed a unique skill for turning around the academic performance of male students and, as such, he is more than ready to introduce what he calls a renaissance at Munro College in his new role as principal of the all-boys boarding institution.

That the institution will celebrate its 160th anniversary next year gives Smith the perfect opportunity to introduce a number of initiatives he has outlined in a 20-year plan that he has already developed for the school since his appointment a little over a month ago.

"My fundamental dream for Munro is that Munro will represent what education in Jamaica should be like for the next 20 years, and so pushing the boundaries of what is possible, what can be achieved is something that I have challenged my staff with accomplishing. I hear a lot of the old boys talk about the good old Munro days but I want to say to them that Munro's best days are yet to come," Smith said in an interview with The Gleaner.

A former inspector at the National Education Inspectorate and community relations officer in Region Five of the Ministry of Education, Smith has worked at several levels in the education system and believes that this experience will serve him well during his tenure at Munro.

"My concept of coming to Munro is really to make a substantial difference ... . One of the things I am committed to is moving Munro forward to, in the first instance, being in the top five schools in Jamaica in terms of academic performance, and overall, the No. 1 school in Jamaica. I am fiercely competitive so I make no apologies about that, and I do believe that the school has all the elements to achieve that, it is not outside of the scope of Munro. Over time, the school has faced a number of challenges but I do believe in a perfect storm and ... my entry into the school comes at a time when a number of elements are aligning," he said.

Smith explained that he has already begun to introduce the concept of total quality management by benchmarking the top boarding schools in the world and compiling case studies that will be used to guide the implementation of his 20-year plan.

The newly appointed principal, who is currently completing his doctorate which focuses on improving teaching and learning among boys, said that he believes that special attention has to be placed on addressing the problems faced by male students.

"There is a need for us to focus in a very strategic way on what we can do to improve the level of engagement of our boys. I don't think it is sufficient for us to say they are not interested. It is our job as educators to create and craft programmes that will engage the boys, and I think I am uniquely positioned to do that," Smith said.

And indeed he is. Smith recalls with pride his time at Vere Technical High School as a vice-principal, where he was instrumental in turning around the performance of male students in the sciences.

"One of the departments I was responsible for is the science department, and one of the things I noticed is that we were not sending a set of our boys to do physics in CXC (Caribbean Examinations Council) exams so I spoke with the teacher and she explained that the boys were getting grades like 10 and 14 per cent and were not of the calibre to do CSEC (Caribbean Secondary Education Certificate). So I asked her to let me work with them and I started meeting with them every week, and after a while we started to see some changes. I also introduced an engineering fraternity club where we worked on blurring the line between the theory and practical ... and to cut a long story short, two of those boys became top students in CAPE (Caribbean Advanced Proficiency Examination) physics in the Caribbean," he explained.

Smith, now set to herald the winds of change at Munro College, says, come September, he will be introducing an engineering fraternity programme and reintroducing boxing, martial arts and fencing. He also plans to make changes to the dorming programme, a process he has already begun by renovating the dormitories and hiring an executive chef to operate the kitchen. This, he says, will provide a more supporting environment for the boys so that they can excel in all areas.