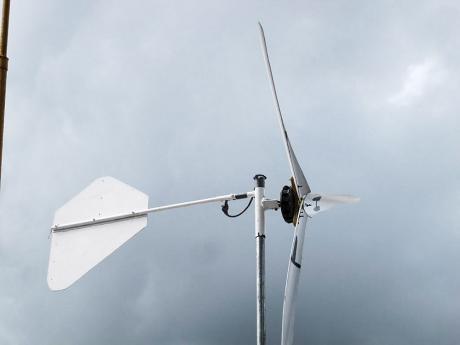 The wind turbine made by students at Vere Technical High School.

The use of renewable resources to provide energy has become a major focal point in Jamaica as the Government tries to curtail the island's oil bill.

Two grade 10 students, with the help of an adult, took it upon themselves to create a wind turbine and used it to provide power for a chicken coop. Rohan Berry, an electrical engineer student at Vere Technical High School, was the lead designer for the power tool, which was made using the blades of an old ceiling fan and other small pieces of discarded equipment.

The turbine produces up to 13.12 watts capable of powering up to six LED bulbs. The energy from the turbine is passed through an inverter to two 12-volt car batteries, where it is stored.

Justin Thomas, an agricultural science student, opted to have the turbine power the chicken coop and the aquaponics system. This system is another one of several innovative model ideas that were on display at the Vere Technical High School booth at Denbigh Agricultural and Industrial Food Show.

Wendell Yates, who works in the maintenance department at the school, completes the hard-working trio. He assisted the students with building the chicken coop as well as putting the wind turbine together.

"Everybody who came to view the displays loves the ideas. We get lots of commendations from persons expressing interest and some also wanted to know if we can design and build for them also." He added that based on the interest generated, they may put a business plan together and eventually launch a business.

Derrick Kellier, minister of agriculture, commended the trio for their hard work as he encouraged them to put their ideas to good use and use it to make a profit.

The group won the Scientific Research Council's first prize earlier this year for their creativity and originality of wind turbine-powered chicken coop.