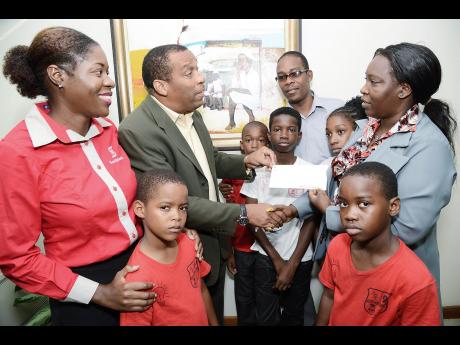 Contributed
Junior Clarke (second left), branch manager- Scotiabank Half-Way Tree and Simone Walker (left), director of Marketing Programmes for Scotiabank, express their approval to Keisha Hayles (second right), principal, of Padmore Primary, when they presented her with a $300,000 cheque towards preparations for the new school year. Sharing the moment are Steven Hayles (fourth right), president of the Parent Teachers Association and five students from the quiz team.

Scotiabank branch manager Junior Clarke had an instantaneous desire to help when he heard the appeal for assistance sounded by principal of Padmore Primary, Keisha Hayles.

She had expressed the challenges being faced by the school, which had initially been slated for closure by the Ministry of Education, during a radio interview.

After having proven the educational viability of the institution with a remarkable performance in the recent GSAT examinations, Hayles was reaching out for help to restore and renovate the school for the upcoming academic year. So serious was she about the potential of the school, she was willing to sell her car to get the required funds.

Clarke was already moved by Padmore's story, but when he realised the school's account was with his branch in Half-Way Tree, he was moved into immediate action to determine how Scotiabank could assist. The result was a cheque for $300,000 donated to the school.

The presentation was made at the branch on Friday, August 7, to Hayles and members of her team by Clarke and Simone Walker, director of marketing programmes, Scotiabank.

According to Clarke: "I was overwhelmed by her willingness to give of her personal assets to assist the school. If she was willing to make that kind of sacrifice, then we at Scotiabank were certainly willing to help her," he said.

"We are pleased to be able to support. the work she is doing is noteworthy; she is an inspiration to Jamaica, he said.

But the gift is not only funding. Walker said the bank would be assisting with the actual restoration of the school and has committed to bringing a team of Scotia volunteers to help with painting and general repairs.

Hayles expressed delight as she collected the cheque, noting that she had received numerous offers, but the gift from Scotiabank was the first real commitment.

"The only way to stem crime is through education," Hayles said.

"Padmore Primary breathes life into the community. without it, the community will lose significantly," she said. There might still be a glimmer of hope for a school, which was scheduled to be closed, thanks to the passion and vision of the principal.