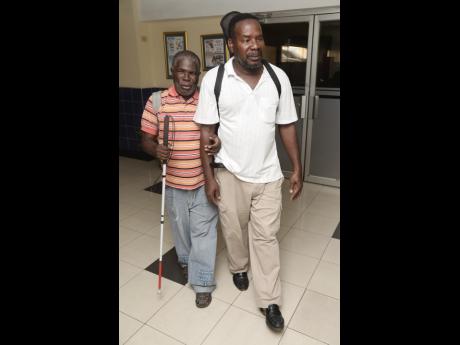 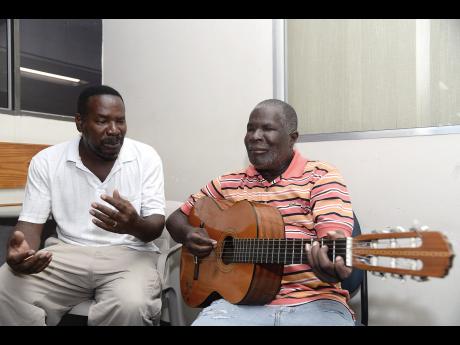 Jermaine Barnaby
Lenworth Duffus (left) and Robert Lawson, blind singers, during an interview at The Gleaner.
1
2

It is said that more heart attacks and sudden deaths occur on Monday, followed by Saturday, than on any other day of the week. According to researchers, an "outpouring" of stress hormones, such as cortisol and adrenaline, occur within working people on Mondays, concluding that this is the most stressful day of the week.

However, singing is said to be the perfect cure for a stressful heart especially for corporate executives who suffer from the Monday blues.

Singing can prompt an amazing release of emotions for the singer and the listener. It can spark imagination, trigger ideas, inspire courage, or simply make you feel good.

Two persons who share these sentiments comprise the Reality Singers. Despite their disabilities, Robert Lawson, 57, and Lenworth Duffus, 53, are aiming to "serenade Jamaica back into bliss".

"We are inspired to sing because not only are we motivating people, but spreading the gospel of Christ. The power of a good song can lift people's spirits, which is what we live for. We are often told, 'Oh, you have made my day', which makes us feel on top of the world."

Sharing a friendship for more than four decades, Lawson and Duffus met at The Salvation Army School for the Blind.

"I never used to enjoy it because I thought I couldn't sing; however, I met a man at the school who was a really good singer and he inspired me to believe in myself. I have always played the guitar and I used to be afraid to use my voice, but now I am no longer afraid to sing. God has blessed me with a wonderful voice to uplift people and I will continue to sing all the days of my life," said Lawson.

Duffus claims to have started singing at his conception. "I was born to sing. Both my parents are singers; it is part of my birthright. I love singing because I hold people's attention and they listen and it gives me respect. When I sing, people become captivated and it has taught me a new way to communicate and see without sight."

Never seeing his blindness as a hindrance, Lawson told The Gleaner, "Often people forget I am blind or don't initially realise it because I communicate and sing very well. My voice makes up for my lack of sight. I see through my voice, which has allowed me to see the world.

"I was born blind. My eyeballs were not developed, but singing has taught me to see from another perspective - see life from another point of view, he added."

The Reality Singers are available for hire to sing at various functions, including special 'power-hour pick-me up' sessions where they can visit various establishments, businesses and companies in order to boost the morale of the office, Duffus told The Gleaner.

"Workers, managers, bosses, CEOs, executives and directors can all lead very stressful lives, which can be resolved by making a joyful noise or by dancing. That is why we sing," Duffus said.

"We use music to make people happy. Sometimes, we sing 'Why Should I be Discouraged... (singing).' This song usually lifts people, especially those who are depressed."

Responding to how they would use music to inspire and motivate the next generation, Lawson said, "First, provide proper resources. Second, I would create a programme for children's tablets so they can learn about music technology and hear true authentic sounds; finally, I would advise people who don't slow down, to take time out and appreciate life ... Stop! Breathe and sing!"

Echoing his sentiments, Duffus said, "I would make change by censoring a lot of the songs which now pollute our young people's minds and get rid of the profanity which filters through the airwaves. Second, I would open more music schools so the next generation of Jamaicans can learn to play instruments. And third, I would encourage the younger generation to give their lives to the Lord."

Among their inspirations are Stevie Wonder, Ray Charles and Jamaican keyboard player Sidney Thorpe from Fab 5.

Hear them sing at www.gleanerjm.com by clicking on Videos.