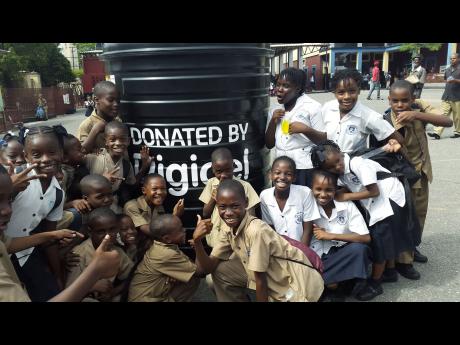 Contributed
These students from St Aloysius Primary School in downtown Kingston were extremely happy to receive their water tank from Digicel last year.

WITH THE country still facing severe water shortage and only a few weeks before the start of the new school year, telecommunications company Digicel has announced that it will reintroduce its Water Tanks in Schools (WTS) initiative.

The company is donating a total of 20 650-gallon water tanks, including underwriting the cost for set-up and initial filling of the tanks to schools in drought-stricken communities across all 14 parishes.

"We have been getting several requests through social media - since last year, in fact - from schools and individuals. So, in listening to our customers, it was only fitting that we ask our social media family to help us identify the schools that are most in need," noted Peter Lloyd, director of marketing at Digicel.

Open to Digicel's Facebook, Instagram and Twitter pages, fans are encouraged to nominate the schools they feel should benefit from this timely and needed initiative by August 25. In making their submissions, fans should upload a picture of the school, including the name and location of the school, plus tag Digicel and use the hashtag #TankMySchool.

Lloyd added, "This is a real issue for everyone as no child should have to miss school because of lack of water, and Digicel is very happy to be able to be assisting as many schools as possible for the back-to- school period."

In 2014, the company donated more than 33 water tanks to primary and infant schools across Jamaica. The initiative later grew to include an online challenge which allowed other corporate companies and several individuals to also join in and either donate water tanks or make monetary contributions towards the purchase of tanks for additional schools.