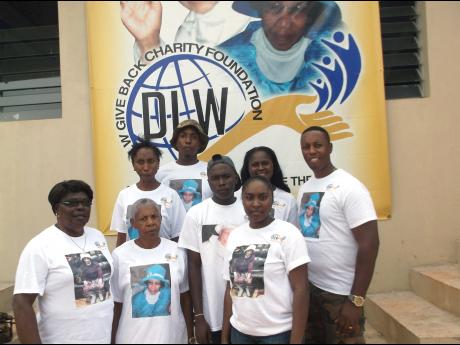 Contributed
Gurvan Whitely (right) with relatives who came together to help treat the children.

On Saturday, August 15, it was a family affair in the quiet community of Bellevue in St Elizabeth. Gurvan Whitely, who is based in New York returned home to ensure children in the community got much needed back-to-school help.

After enjoying being fÍted with food, drink, fun educational games such as a maths quiz, the children got to take home well-needed school supplies.

In an interview with Family and Religion, Whitely said the idea came about when his sister, Pastor Bernadine Whitely-Holness suggested they do something for the children back home.

"She said even though we have our children to deal with, things are tough in Jamaica. From then on, we started networking to make it happen through our foundation," he said.

According to Whitely, who is a father of four, he sees the children in Bellevue as his extended family and, therefore, he was motivated to ensure that parents get the desired help.

Parents signed for vouchers while children received packages with notebooks, pens, pencils and other school supplies.

The vouchers can be used for school uniforms, shoes and other school accessories.

For Whitely it was a chance to carry on the foundation his mother, Doris, started in the community.

"She was always a community person. She believed in a sense of family and that didn't mean her biological children. She was a mother to many. She lived to help others," he said of his late mother who was also a church bishop.

He said the legacy she left behind was the main reason he set up the foundation in her name to make the same impact on people in the community.

He also expressed gratitude to the business entities in the parish that helped, such as Andy Williams Hardware, Neil's Enterprise, and The View Restaurant, which all donated to the cause.

Whitely said no words could explain the feeling of joy he receives when he sees the smiles on the children's faces.

He urged those who are able, to make an effort to give back in their own way.

"Family don't have to be your bloodline and, a lot of times, it doesn't take much to put a smile on someone's face. So if everyone who can afford it, does something in their own small way ... many lives would be better."