Kemar Maragh looking to make his dream a reality 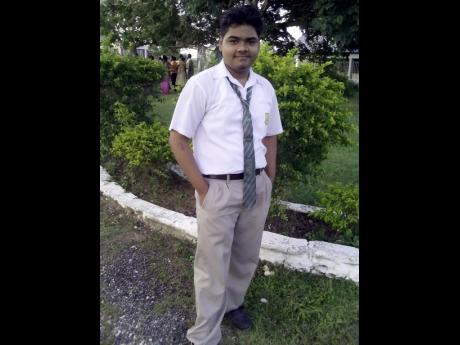 One word that is not a part of 19-year-old Kemar Maragh's vocabulary is 'quitting'. "When the world says give up, hope whispers 'Try one more time'," he said.

Maragh, who is among the first batch of students to complete sixth form at Petersfield High School in Westmoreland, has been accepted by the University of the West Indies to read for a bachelor of science degree majoring in accounting, in the Faculty of Social Sciences. The only cloud on the horizon is that the finances are not yet in place to take up the offer.

"I have worked hard despite the financial setbacks in my life. Thankfully, it has made me a stronger person today, who works much harder to make my dreams come true," he said.

In addition to being the head boy at Petersfield High, he is also a top performer in several subjects. Today, he has his sights set on being an accountant.

"It is my passion to become an accountant. Accounting is a part of every business. Every organisation that deals with money must plan for, keep track of, and report that money. Without accountants, businesses cannot succeed," he reasoned.

There is hope on the horizon for Maragh, as Jamaica-born New York resident, Esroy Bernard has pledged to assist him get the almost $1 million it will cost to achieve his dream.

In an interview with Family and Religion, Bernard, who hails from Westmoreland and who graduated from Savanna-la-Mar High School, and the University of Technology, said he met Petersfield's principal Clyde Evans in April, when he accompanied 16 track and field athletes from the school to compete at the prestigious Penn Relays Carnival in Philadelphia, for the first time. In June, while on a trip to Jamaica, Bernard made a courtesy stop at the school. This was when he met Maragh.

"Principal Evans briefed me about Kemar and I was immediately drawn to him because, like myself, he was a head boy. Additionally and more special, he was head boy twice (2012-2013 and 2014-2015)" Bernard noted.

For Bernard, it takes extraordinary courage, focus, and discipline to hold the mantle of leadership from this early age.

He said upon meeting Maragh, he was struck by his poise and humility.

"I told the principal that I would do whatever I could to get him financial assistance to attend university. I am an advocate for education and we should nurture talent and leadership from an early age," he said.

"I am not a past student of Petersfield High School but as a son of Westmoreland, I want to help. I implore others to assist Kemar to make his dream of attending university a reality," Bernard said.

Evans is also batting for Kemar.

"The records will show that not only has he (Kemar) done well academically, but he has been able to effectively balance his academic work with his community service along with his responsibilities as a head boy."

Evans expressed pride in the student as a member of the first batch of sixth formers at Petersfield.

"I believe he deserves the opportunity to continue his education at the university level. It will be just reward for his years of hard work. I am confident that, if given the opportunity, he will do well and that he will make himself, his family, his school and all who assist him very proud and pleased to have been a part of helping an ambitious young man achieve his dreams."