For our parents’ sake - Two brothers dare to dream big 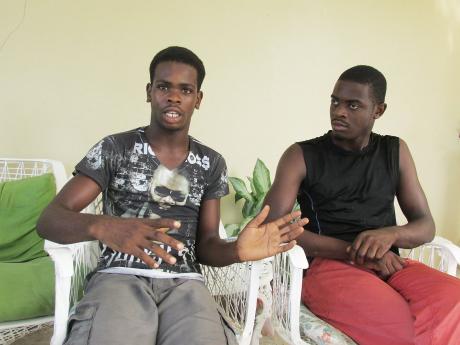 Paul H. Williams
Alvin Brown (right) looks on as his brother, Selvin, makes a point to 'Family and Religion' on Monday.

In a conversation with Family and Religion on Monday, it was heartrending to hear Alvin speak of the many challenges that he has encountered so far in his short life, but it was the high level of maturity that Selvin demonstrated in articulating what keeps him focused, and what he wants to do with his life that was most touching. The brothers are two of nine siblings - some very young. Life for them all, to say the least, is not pretty.

"When we do go to school, we are often hungry and tired, so we are not in a mood to learn. We are thinking about what we are going to eat later, what's going to be for breakfast tomorrow. We are always thinking ahead for we know the amount of money our father works," Alvin explained. He has overcome learning challenges to graduate recently from Tacious Golding High School, while Selvin sits his CSEC subjects next year at the same school. Alvin is now living on his own, fending for himself, and helping out Selvin, to help remove some of the responsibilities from their parents' shoulders.

"What really struck me to go on my own at an early age is seeing my father come home at night. When he sat down and laid the money on the table, trying to budget it - and when I saw my mother sit down with tears running out of her eyes. That makes me feel so down. (I had to) move to give them one less mouth to feed," Alvin disclosed.

To survive, he sells bag juice and does a little farming.

"We put ourselves out there to help ourselves so that they can give more attention to the smaller ones," Alvin explained. When he moved, he was still not satisfied with the state of affairs at his parents' home, so he invited Selvin to share his humble accommodation.

"What enticed Alvin to draw to me and to help me out is that I have this confidence, this self-motivation," the younger Brown said. He is making a contribution to his family's nutritional needs.

"Whenever I plant a new plot of crop such as pak choi, cabbage, or carrots, I just carry those to the dinner table," he said. The extras, such as plantains and bananas, are sold to get cash. The hardship, they say, motivates them to bond, and do something positive with their lives.

"Knowing that life is not all about destroying your future. You can't get distracted from the path you are taking, and your past has a lot to do with you, and that doesn't mean you should think about it and destroy your future, but let that motivate you and uplift you," Selvin said.

But what makes these two young men so focused and level-headed with so many distractions around them? Alvin attributes it to the solid advice to given them by their father who uses 'small things' to teach them how to deal with their situation. They might not have much money, but they get a lot of counselling. Selvin, who said he is a Christian, replied, "I have this faith knowing that God will provide for me, no matter what circumstances, no matter what obstacles may come along the way, I know I will achieve my goal."

The conviction also seems to be coming from deep within, as he said, "It comes from the inner part of me. When I look and observe life, and how the society is built, I said I don't want to make the mistake that people make. So I let people's mistake be an example for me. I see something beyond vanity, and that something is life, a life worthwhile."

Alvin wants to join the army, and life to him is not about the destination; it's about the journey, and on his journey, he said, anything that is not uplifting, such as conflicts and peer pressure he avoids. Should he not get into the army, Alvin said he is also interested in entertainment and counselling, and using his life story to help other youths cope with their own challenges. And importantly, he said he wants to acquire a skill such as welding, tiling, woodwork, and auto mechanics. Selvin would like to lecture or do student counselling. And with the passion and conviction with which they spoke, there is no doubt they will live their dreams. They say they want to be surrounded by positive people who will motivate them.

"I know my potential, and I know I can accomplish what I want, (I) just need a little help, and a little more motivation," Alvin said. And he noted that our leaders have failed his generation, and turned around and 'despised' them.