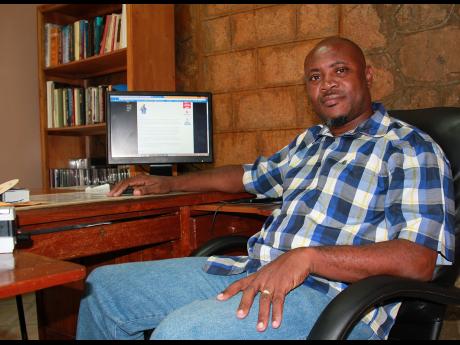 Reverend Leo Hall is an avant-garde, St Mary-based minister who is comfortable utilising unconventional methods to engage the local community in Cromwell Land, Highgate, where Bethel United Church is based.

Hall is an astute and eloquent St James-born technophile and author who has lived in Highgate since 2003 and believes that to attract new members, Jamaican churches must modernise by making greater use of technology and providing revenue-generating and employment opportunities.

He told Family and Religion: "Highgate is an interesting community with some things that people don't appreciate, but more positives than negatives. The town is consistently evolving, which is why it's very important for us as church leaders to be sensitive to those changes.

"We provide a very unique ministry and do not consider ourselves a denominational church. We seek to support and minister to the entire community and have been able to use the media to develop a ministry that maintains relevance," he said.

"We use social media, operated a cable TV ministry for a period of time, and are hoping to launch a radio station in the next couple of months. Media has become very dynamic and, to God be the glory, I think that has assisted Bethel."

In 2012, Hall launched an agency providing young people with employment and electronics training, and recently established an initiative, alongside the Universal Access Fund and the Lime Foundation, enabling his church to provide local residents with free computer and Internet access.

However, in spite of the progress made in recent years, Hall acknowledged that there is still much work to be done. He explained: "The greatest challenge for us is to counter the growing trend of secularism because this community is very secular. St Mary is rich in round-robin events. In years gone by, they only took place on Friday nights, but now round-robin is taking place on Sundays and weekdays. As people make these changes and reduce the amount of time they spend in church, we have to look at how to reach them. And that's one of the reasons we have a computer laboratory; we want to encourage people to do something with their time other than getting caught up in round-robins," he said.

"The second concern we have is necromancy and witchcraft, which is very popular. Some people behave as if it doesn't exist, but it does. There is a very popular place in Highgate that people travel to from as far as Westmorland. The problem is not so much the locals, but people from outside coming in and so we have to spread our wings, which is where the media ministry comes in. That will enable us to say to people: 'Instead of coming to Highgate for the obeah man, why not visit the church?'"

Looking ahead, Hall hopes the Government will provide more support to his training and employment venture. "We are training and creating employment for young people, but the red tape we have to deal with is a hurdle. Before the business is even established, Government is expecting taxes to be paid.

"Oftentimes, we don't get to grow the way we would like, so I would like the Government to say to the pastors that they are putting a system in place where churches that want to start employment businesses will be exempt from taxes for the first year or two."