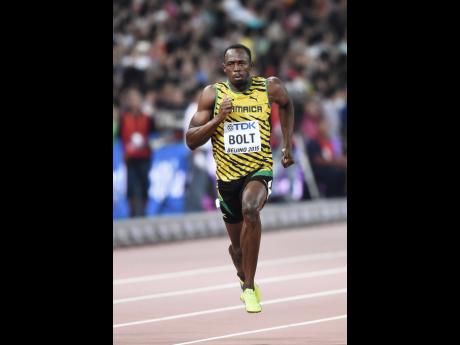 Bolt stave off stiff competition from American Justin Gatlin, amid doubts that he could defend his title due to a season plagued by injuries and performances that measured below his own standards, to reclaim the World Championship title.

Bolt won the event in 9.79 seconds, 100th of a second ahead of Gatlin, who crossed the line in 9.80 seconds.  Trayvon Bromwell of the US and Canada's Andre Degrasse, who both finished in 9.92 seconds, were third while the only other Jamaican in the race, Asafa Powell, was seventh in 10.0 seconds flat.

In a release, Opposition Leader Andrew Holness described Bolt as a legend. He says "he has proven to the world once again that he is still the man".

He hailed the nine-time World and Olympic champion gold medallist for "rising to the occasion" and for making Jamaicans locally and overseas proud.

Prime Minister Portia Simpson Miller said Bolt continues to inspire Jamaica and the world with his legendary performance on the track. “I salute Usain as a national brand ambassador extraordinaire, not only for taking the best of Jamaica to the world, but also for his superb representation of the best of athletics and sports in general,” she said in a statement.

"Bolt in the Bird's Nest proved, without a doubt, that he is the greatest!" declared Olivia Grange, the Opposition spokesperson on sports, culture and gender affairs.

"The world has witnessed once in a lifetime, once in a generation, a feat that can never be surpassed, when world record holder, Usain Bolt, faced his sternest test as an athlete and won the 100m race," Grange added.