Ganja growers warned: GET 'LEGIT' TO GET IN IT! 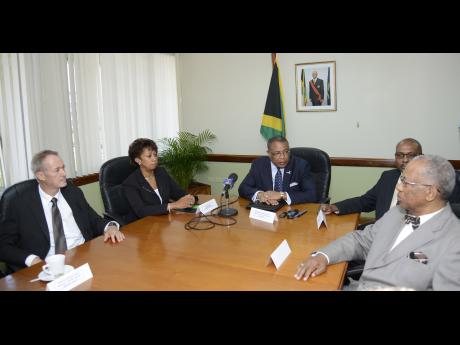 Local ganja growers, particularly small farmers, are being urged to enter the formal market to benefit from the decriminalising of the product rather than seeking to operate in the underground economy.

With ganja being illegal, growers had to operate in the shadows, knowing that they faced long prison sentences and stiff fines if caught.

But with the amendment of the Dangerous Drugs Act, which became law on April 15, 2015, paving the way for the legal introduction of medical marijuana, industrial hemp, and cannabis, the Government is warning that persons who have been profiting from the illicit ganja trade will soon be required to transition into the formal framework or face strong sanctions.

Minister of Industry, Investment and Commerce Anthony Hylton issued the warning recently following a media briefing on the Status of the Cannabis Industry Regulatory Framework.

"It's part of the design, the architecture that will be put forward. We have to make sure that the penalties are such that they incentivise the behaviour that we want to encourage," said Hylton, as he noted that the Cabinet has to approve the penalties.

"But the Government has to make sure that the scale is so tipped that people find it much easier to be lawful than unlawful. Including the discouragement of whatever profit they think they'll make," added Hylton.

However, Professor Anthony Clayton, who has been appointed to head the Cannabis Business Advisory Council, is warning against over-regulating so as to not drive away potential investors.

According to Clayton, the right balance has to be struck so as to ensure that the industry is opened for all legitimate competition to come in and offer the best service and best product quality that they can.

He said it will then be up to the various players to decide if they want to do proper business or remain in the shadows.

But they must expect that if they are going be part of the formal marijuana industry it is going to be standards based.

"But if people are still manufacturing products on the illegal market, then the Government is very unlikely to tolerate that.

"You make it easier, simpler, and cheaper for people to do the right thing, but at the same time, you also have to try and make it difficult for them to do the wrong thing."

Clayton is joined on the panel of consultants by Dr Andre Gordon, who heads the Cannabis Licensing Authority, and chairman of the Bureau of Standards Jamaica, Professor Winston Davidson.

The panel has been tasked with developing the governance and regulatory framework, and Hylton is expecting to receive the final recommendations from the consultants by the end of September.

When everything is in place and the industry is up and running, Hylton anticipates that there will be several income-generating avenues, such as patents and intellectual property rights.

"We hope to attract a lot of that - patents and intellectual property and a lot of investments around research and development," said Hylton.

"The other area is tourism related activity. There are many who are interested in greenhouses, so the whole export market. There is manufacturing, and in particular the special economic zones in which we hope to attract investment; manufacturing investment with a number of value-added activities around it."