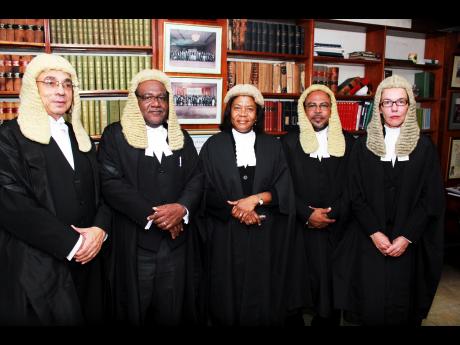 Contributed
In this June 2012 Gleaner file photo, then newly appointed Queen's Counsel flanked Chief Justice Zaila McCalla (centre) in her chambers after she admitted them to practise at the Inner Bar. From left: George Soutar, Walter Scott, David Batts and Sandra Minott Phillips.

The debate about how lawyers are appointed Queen's Counsel (QC) locally has re-ignited with fresh calls for changes in the way appointments are made and for more persons who operate at the criminal Bar to be appointed.

This time, the lawyers are calling for a commission to be set up to do the selection of Queen's Counsel.

They have pointed to the system in England, where in 2004, after much public debate, the Government announced that future appointees would be selected by a nine-member commission led by a lay person and including two barristers, two solicitors, one retired judge and three non-lawyers.

The QC is entitled to charge much higher fees than other lawyers and "take silk", that is to have the honour of wearing a silk gown and sit in the 'Inner Bar' in court. A lawyer applying to be a Queen's Counsel must have at least 10 years' practice as an advocate.

However, some attorneys have long complained that persons who practise in the criminal courts locally are ignored when it comes to appointing QCs.

They note that Jacqueline Samuels-Brown is the only QC who practises frequently in the criminal courts. The others have either retired or have significantly reduced their court appearances.

One lawyer remarked that gone are the days when the presence and skills of stalwarts like Queen's Counsel Frank Phipps, Ian Ramsay (now deceased), Howard Hamilton, K. Churchill Neita and K.D. Knight were felt in the courts islandwide.

"They had their crowd, including young lawyers, flocking the courts when they appeared in court," said the lawyer.

"There is no transparency used in the process to appoint Queen's Counsel," added one lawyer, whose application was rejected a few years ago. "Up to this day, I got no reason for the rejection and although I have been encouraged to apply again, I have lost interest," added the lawyer.

George Soutar, QC, president of the Advocates' Association of Jamaica, agrees that there is a shortage of Queen's Counsel at the criminal Bar.

NEED TO LOOK AT ATTITUDE

According to Soutar, those doing the selection need to look at the attitude they have towards those who practise at the criminal Bar.

"The criminal lawyers are not going to have the same personality as the civil lawyers and are going to be in conflict with the police, judges and the State," said Soutar, as he argued that lawyers at the criminal Bar have reasons to criticise the administration of justice because of how police station and other government departments are run, and as to how the Constitution of Jamaica is adhered to.

But Patrick Foster, QC, who helps in the selection of Queen's Counsel, is adamant that the process is open, transparent and broad-based.

According to Foster, the selection process includes a range of stakeholders connected with the legal profession and the justice system.

"I am prepared to agree that there is a limited number of Queen's Counsel at the criminal Bar, and it is something we have in fact discussed," said Foster.

"The style of advocacy of criminal lawyers is different from civil lawyers, but in the end, Queen's Counsel must be lawyers who distinguish themselves as advocates of the Bar and lawyers who are leaders and adhere to the ethics of the profession. Those principles are applicable whether you are a civil lawyer or a criminal lawyer," added Foster.